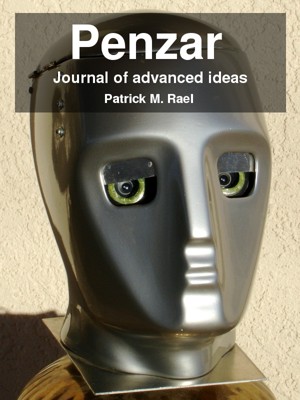 By Patrick Rael
Patrick Rael provides his own solutions for several extremely challenging problems in nature, science, and the humanities. From tornadoes to android robots to physics and more. More
This ebook has solutions to several of the most challenging problems in science and the humanities:
- How to disrupt a tornado.
- Firefighting techniques for oil well, forest, and skyscraper fires.
- Symbiotic human and android labor, plus the 14 laws to guarantee it.
- A new intelligence scale: L8.
- Immortality via android robots.
- Gender-neutral third-person pronouns.
- Where is the missing 95% of the universe? Found!
- A new physics that is simpler and addresses dimension directly.
- What does a gravity engine look like, and where to install it in a spaceship?
After this whirlwind, a poem is a fitting end that brings you down to earth.
Download: epub mobi (Kindle) pdf more Online Reader
rtf lrf pdb txt
Price: Free! USD
Add to Library
Create Widget
Tags: robotics intelligence space ship tornadoes physics laws android robot gravity engine genderneutral thirdperson pronouns
About Patrick Rael

PATRICK M. RAEL - Patrick has a Bachelor of Science degree in Computer Science, 1990, at the University of New Mexico in Albuquerque. He worked 10 years (1988-1998) in the U.S. Geological Survey doing IT and Computer Graphics at locations in Albuquerque, Little Rock AR, and Reston VA. He was part of the USGS Technical Advisory Committee on IT. He took a year off to write more. He joined America Online in Reston VA from 1999-2005 and did software engineering using perl, mason, DBI and shell scripting. He took a year off to write more. He joined Lumeta Corp from 2006-2011 (Lumeta Corp is a Bell Labs spinoff). He did software engineering working with FreeBSD, automating installation, upgrades and install via CD, and field upgrades. Patrick left Lumeta Corp in early 2011 to publish his first book 'Penzar Journal of advanced ideas'. He likes problem solving and prefers Unix OS.

You have subscribed to alerts for Patrick Rael.

You have been added to Patrick Rael's favorite list.

You can also sign-up to receive email notifications whenever Patrick Rael releases a new book.