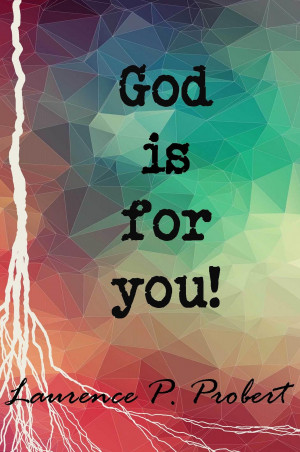 God Is For You

By Laurence Probert
The Gospel reveals a Jesus who is for us. In all situations and circumstances, He is for us, and never against.
Download: epub mobi (Kindle) pdf more Online Reader
lrf pdb txt
Price: Free! USD
Add to Library
Create Widget
Tags: god help good
About Laurence Probert

Laurence Probert was born in Johannesburg and graduated from the Potchefstroom High School for Boys in 1960. He subsequently worked at Stilfontein Health Committee and later studied for the Christian ministry at Rhodes University in Grahamstown. He was ordained in 1968 and ministered in several churches in Pondoland. He married Patricia Clarke and they relocated to Pretoria, with their adopted daughter Sandra. There Laurence pastored three churches.

Five years later, he relocated to Bloemfontein with his wife and the addition of two sons, Jonathan and Justin. He pastored the Wesley Methodist Church in Noordhoek and after three years relocated to Ermelo in the then Eastern Transvaal, where he pastored several churches in that area. Christopher, his youngest son was born during that time. Three years later, he joined Campus Crusade for Christ and relocated to Krugersdorp on the West Rand.

Subsequent to that, Laurence ministered in several churches and later relocated to East London in the Eastern Cape, where he taught English and gave Religious Instruction at John Bisseker Senior Secondary School and Selborne College.

After a two-year stint in the Methodist Church in Port Elizabeth, he returned to Gonubie, East London and entered the business world where he was involved in Real Estate and started a Carpet and Upholstery Cleaning business and subsequently owned and established a very successful Bed and Breakfast business. Nearly eleven years later, he retired from active business and settled in Dundee, Kwa- Zulu Natal, where he resides in a retirement complex with his wife.

Reviews of God Is For You by Laurence Probert

You have subscribed to alerts for Laurence Probert.

You have been added to Laurence Probert's favorite list.

You can also sign-up to receive email notifications whenever Laurence Probert releases a new book.