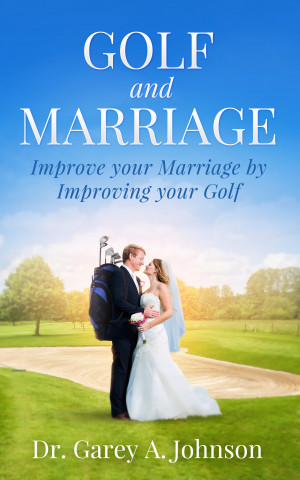 Golf and Marriage: Improve Your Marriage by Improving Your Golf

Golf and Marriage shows how golf smarts can improve your handicap AND your marriage.

This book offers ideas and techniques that can turn golf from “a good walk spoiled” into a marriage enhanced. The secret lies in learning to overcome your toughest opponent—no, not your wife or your husband, your own mind.

Golf and Marriage is an entertaining and practical read that requires only a desire to be better at golf, marriage, or both. In it's 120 pages, the author discusses the many parallels between what it takes to play golf well and what it takes to have a positive-going marriage. The key lies in learning how to apply what you learn from your experiences on the golf course to the ones you have at home.

Garey Johnson grew up in Benton Harbor, Michigan and received his doctorate from the School of Public Administration at the University of Southern California after studying electrical engineering, quantum physics, international business, and systems management. His work was nationally recognized and earned him Dissertation of the Year honors from the American Society for Public Administration.
A lifelong serious athlete, Dr. Johnson has played many sports. As a collegiate, he played basketball and football and received tryout invitations from NBA and NFL franchises. A third-degree black belt in Korean karate, he regularly competed in national and international tournaments and garnered the title of Western States Karate Champion. As a captain in the United States Air Force, he was the head martial arts instructor at Williams Air Force Base as well as a senior instructor pilot in supersonic jet aircraft.
Dr. Johnson currently holds a single-digit golf handicap and has played golf in seventeen different countries. His favorite golfing venue is Bandon Dunes, Oregon. He, his wife, and their two teenage children reside in California’s San Francisco Bay Area.

You have subscribed to alerts for Garey Johnson.

You have been added to Garey Johnson's favorite list.

You can also sign-up to receive email notifications whenever Garey Johnson releases a new book.