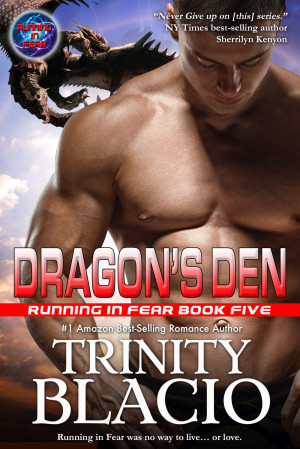 Dragon’s Den - Book Five of the Running in Fear Series

In this Fifth title in Trinity Blacio’s best-selling Running in Fear series, the were pack meets and finds love with a dragon shifter vampire species.

Suzanne Butterfield wanted an alpha male of her own.

As danger loomed, five came together More
In this Fifth title in Trinity Blacio’s best-selling Running in Fear series, the were pack meets and finds love with a dragon shifter vampire species.

Suzanne Butterfield wanted an alpha male of her own. It was hard to admit that she was jealous of what her friend Tonya had; a man who knew how to control her life, worship her body and make her submit. Of course it helped that Tonya’s man was an Alpha of his werewolf pack, built like a tank, and tall as a mountain.

Archer Morganthe, Clan leader of the Florida Everglades Vampires, was a loner; only his right hand man knew of his longing for Dominic. When he finally had him within reach, Archer found himself surrounded by Dominic's allies as well. He didn’t know how he was going to survive with so many around him, but somehow he would live to protect his mates.

Granger Iceshard, or as many called him--the Ice Man, listened to no one, claimed no clan. Always a ladies’ man, Granger was confused by his body’s overwhelming desire towards the men around him. The only problem was when he was confused, it made him dangerous.

Blair Wellworth was a Vampire warrior and wizard, and could shift into any animal. Only his family knew of his secret, but when danger threatened one of their Kings, Blair opened his closed heart for the love of his companions.

As danger loomed closer, the five came together, not only to protect each other, but also to prepare for what the Goddess of Vampires, Empusa, has warned them about -- the war between good and evil.

You have subscribed to alerts for Trinity Blacio.