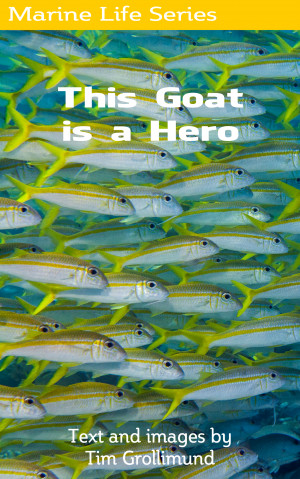 This Goat Is a Hero

Single goatfish usually have up to three “follower” species at a time. Goatfish groups attract up to six follower species. These are primarily benthic carnivores. When critical mass is reached, the crowd includes herbivores that swoop in for the algae present in the cloud. There were no documented instances of herbivores following a single nuclear goatfish - they stated it only occurred in a group setting of eight or more goatfish.

The top five followers in the Brazilian study were puddingwife, coney, yellow jack, horse-eye jack and red parrotfish. I don’t ever recall (basically because I never really paid that much attention) seeing that particular mix of species hanging out with a goatfish. In the Keys I have seen them with yellowhead wrasse quite often. I’ll pay more attention now if it helps me get closer to a puddingwife. In my experience they are typically shy and difficult to approach, but the colors are terrific if you can get close enough to illuminate them."
Available ebook formats: epub
Price: $2.99 USD
Buy Add to Library Give as a Gift
How gifting works
Create Widget
Tags: florida keys scuba diving marine life marine biology underwater photography marine science marine sanctuary reef conservation goatfish nuclear species
About Tim Grollimund

Tim spent nearly a decade in Key Largo, Florida. He wrote the scuba diving column for the local newspaper, The Reporter, for over three years, and also served as a Working Group member and Alternate Representative on the Florida Keys National Marine Sanctuary Advisory Council. His ebooks are all based on his newspaper columns. Each ebook has a collection of underwater images shot by Tim. The ebooks cover a wide range of marine life species and ocean conservation topics.

About the Series: Marine Life

Reviews of This Goat Is a Hero by Tim Grollimund

You have subscribed to alerts for Tim Grollimund.

You have been added to Tim Grollimund's favorite list.

You can also sign-up to receive email notifications whenever Tim Grollimund releases a new book.