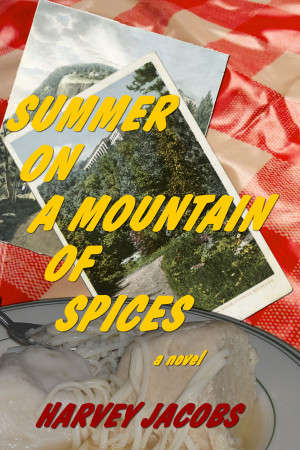 Summer on a Mountain of Spices

By Harvey Jacobs
Life at a Catskill hotel in the last days of WWII and the first minutes of the atomic age. More
From the author's introduction:
"Summer on a Mountain of Spices" (the title derives from the "Song of Solomon) is a novel, i.e. a fiction, based on life at The Spring Lake House, a small family hotel, in the summer of 1945 during the last week of World War II. Spring Lake was a mile from Monticello, the summit of the Jewish Alps. It catered to refugees from the garment center and an occasional professional (a lawyer, a dentist) escaping Manhattan's brutal heat for a few weeks and allowing wives and children the chance to breathe some fresh air, feast on incredible Jewish dishes and polish skills at tennis, baseball, swimming, Mah Jong, Poker, Pinochle, even dancing to a four-piece band in the "casino."
Guests at the modest hotel (financial mosquitoes compared with the wealthy at enclaves like Grossinger's and The Concord where, my father would say, "people walk on cement, not grass") still considered themselves superior to families that rented bungalows in colonies we called kuchalains where you had to do your own cooking and cleaning.
Spring Lake was owned and operated by my aunts and uncles. My summer job, at age fifteen, was running the "concession" under a banner that read WHY STARVE? YELL HARV! that sold cigarettes, cigars, sodas from the Nu Icy bottling plant, candy bars and other essentials of the good life.
That summer I was hammered by three gigantic events: I had discovered girls and browsed the mysteries of sex. News of the unthinkable horror of the Holocaust was revealed in the press and on radio. The furious dawn of the atomic age not only signaled the end of the war but possibly the world. Those huge revelations took root beside my own self-centered, selfish fantasies about my future. In 1973, when I wrote the novel, I still squirmed over the inner swirl of that long-ago summer.
Despite the bloody tally of the war and the crushing acceptance of the Holocaust, I wanted my own turn at life and I told my story like it was, a mix of pain and humor, the amalgam that's part of every Jew's heartbeat (and maybe everybody else's too.)
When I wrote "Summer" my object was to preserve the events and emotions I'd experienced some thirty-five years earlier. I thought members of my family who were still alive (both of my parents had died by then) would be pleased at the attempt to preserve our legacy of memory. The novel is fiction but family members looked for characters that were closely based on themselves and revealed too many of their little foibles and secrets. Many were outraged instead of pleased at what I thought was a warm, loving and funny memorial.
The critical reception was very positive and resulted in a Broadway and film option which, alas, never came to anything. In any case, my memory of a long-ago summer is alive and well.
Others, with different memories, like Mel Brooks, Woody Allen, Jerry Lewis, and Alan King (who also optioned my novel and was working on a script which had the young narrator end up in the oval office as the first Jewish President... Hollywood does have a way of seeing things) and films like "Walk on the Moon" produced by Dustin Hoffman have helped stir curiosity about climbing "The Jewish Alps."
"Summer on a Mountain of Spices" is about discovery, love, tears, sacrifice, and honoring the past while laughing at our clumsy attempts at grace and the fun of watching us all trip on the banana peel we call reality on the summertime voyage from somewhere to somewhere before the snow falls.

Harvey Jacobs is the award-winning author of "American Goliath" ("An inspired novel"—TIME Magazine). His short fiction has appeared in a wide spectrum of magazines in the USA and abroad including Esquire, The Paris Review, Playboy, Fantasy & Science Fiction, New Worlds, and many anthologies. In addition to the novels and short stories, he has written widely for television, the Earplay Project for radio drama, and helped create and name the Obie Awards for the Village Voice. He was publisher of the counterculture newspaper, East. He received a fellowship from the National Endowment for the Arts, a New York Arts Council CAPS award for drama, a Playboy Fiction Award, and a Writers Guild of America script award.

REVIEWS OF THE AUTHOR'S PREVIOUS BOOKS

A cheerful celebration of a big American myth... An inspired novel.
—TIME Magazine

His characters are haunting. . . . I have rarely enjoyed finding a writer as much as I have enjoyed my own discovery of Jacobs.
—Robert Cromie
Chicago Tribune

He manages to satirize our all-too-human foibles and failures without becoming too blackly unforgiving.
—Thomas M. Disch
Washington Post

Quietly amused, wry approach that gives distinction to Mr. Jacobs' work . . . his dry humor would be hard to improve on.
—Elizabeth Easton
The Saturday Review

A wonderfully engrossing read. . . . I recommend it to everyone who has given up of ever again being entertained at such a high level of aspiration.
—Michael Moorcock

Look upon the amazing world of Harvey Jacobs! Come one, come all, for an experience never to be forgotten!
—Fred Chappell

A great book should aspire (and succeed) in making you laugh, making you cry and just maybe, making you think. . . . Harvey's novels will do all that.
—John Pelan

You have subscribed to alerts for Harvey Jacobs.

You have been added to Harvey Jacobs's favorite list.

You can also sign-up to receive email notifications whenever Harvey Jacobs releases a new book.