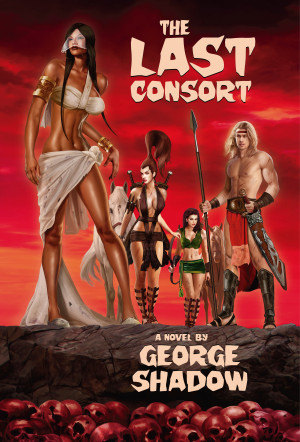 Ukachukwu Chidube George (aka George Shadow) has been writing for almost three years now, although he’s a physiotherapist living in Nigeria. Creativity is his first love, and he has as his motivation for the BOOKLORD ADVENTURES, such titles as the HARRY POTTER Series by J. K. Rowling and THE LORD OF THE RINGS by J. R. R. Tolkien. Such wonderful works of literature are rarely repeated these days, and this was partly the reason for his embarking on the BOOKLORD ADVENTURES SERIES. He has completed a few other romance and fantasy novels and his stories usually take up magic and mystery as themes, with a large dose of history (both real and fantasized) thrown in. He also has some finished short war stories he intends publishing as a book of short battle stories in the future. . . . Titled THE WAR CHEST, this will be a collection of poignant battle tales from around the world.
THE BLACK BOOK is the first part of a fascinating series of six books he has tagged the Booklord Adventures, and is a beautifully written novel filled with very funny scenes. It is suitable for children, teens and even their parents! Thoroughly researched and passionately expressed, this book is a must-have for book collectors and fantasy lovers.

Reviews of The Last Consort by George Shadow

You have subscribed to alerts for George Shadow.

You have been added to George Shadow's favorite list.

You can also sign-up to receive email notifications whenever George Shadow releases a new book.