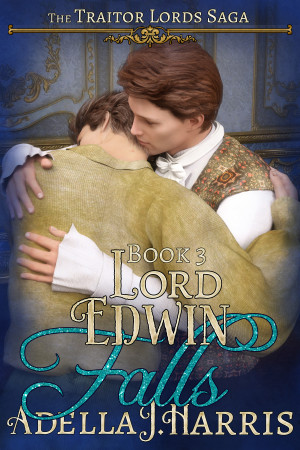 By Adella J Harris
Allen Brideson owns a successful shipping company, but why can’t he get one dockworker out of his dreams? Lord Edwin was at Oxford when his father and brother plotted to kill the king. He is working on the docks to survive when he’s hired by the kind Mr. Brideson. But he knows it won’t last; Mr. Brideson wants to be part of the ton, and Edwin knows being seen with him will make that impossible. More
Three traitor lords plotted to kill the king; now their sons must deal with the aftermath.

Alan Brideson has almost everything his father wanted for him: a prosperous business he enjoys selling objets d’arts imported from the Far East, a good address in town, and if everything goes according to his plan, he will soon have the last piece--a titled bride and entry into the world of the ton. All he needs is to cultivate a friendship with someone who has influence, who can help him get his vouchers for Almack’s famed balls. If only he could understand why he keeps dreaming about a certain dockworker he hired. Surely it was only because the man was an interesting puzzle who could read the languages that passed through the office daily.

Lord Edwin Gilford, younger son of the Earl of Martford, was studying Eastern languages at Oxford when his father and older brother participated in the plan to kill the king, and when they ran from agents of the Crown, so he wasn’t a suspect, and he wasn’t there when all of the Martford property was seized. Unable to find a position as a clerk because of his father’s treason, he takes any job he can get on the docks, where no one asks about Ed Martin’s past. At least until he gets a job at the Brideson Warehouse and accidentally reveals that he can read the foreign words on the crates. When Mr. Brideson offers him a position as clerk, he knows he should refuse, but the interesting work and promise of a guinea a week is too tempting, almost as tempting as Mr. Brideson’s kindness.

Working so closely makes it impossible to deny their attraction. But as Alan gets closer to the vouchers and the future he’s worked so hard for, Edwin knows he will have to leave. There is no way Edwin can go unnoticed and unrecognized in the world of the ton, and he will not repay Alan’s kindness by ruining his chance for a titled bride, and being seen with the son of a traitor lord would surely do that.

About the Series: The Traitor Lords Saga

Three traitor lords plotted to kill the king; now their sons must deal with the aftermath.