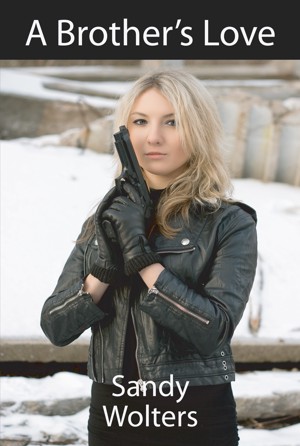 By Sandy Wolters
Rated 3.00/5 based on 1 reviews
Encountering one dead end after another trying to locate Pilar, Boone Baker goes to extreme measures to draw her out in the open. In one fell swoop, he crumbles her world around her, destroying what is most precious to her. Will she be strong enough to continue on, or will he get his revenge? More
How do you protect a woman who carries a gun and loves to use it? You outfox her while holding your breath!

FBI Special Agent Pilar Campos lives and works in a man’s world, and she loves her job. What could be better than pointing her gun at people and arresting them? A smart ass with a temper, she is not above breaking bones if someone disagrees with her. She enjoys seeing the fear she inspires in her coworkers. Needless to say, she doesn't have many friends.

Pilar and her partner, Rick, have been executing surveillance on the Snowflake Militia Group for two years. Everything is going just fine with the twenty-seven-million-dollar operation until she is forced to shoot and kill Thorne Baker, the brother of the self-proclaimed leader of the militia group, Boone Baker. This is the moment her life changes forever.

Boone Baker initiates a one million dollar contract on Pilar’s life and will go to any length to avenge his brother’s death. Deputy Director Greg Olsen knows he has to get his best agent into protective custody. He also knows she won’t go even if he orders it; she’ll stay and fight to the end. So, he hatches a plan without her knowledge to tuck her away at a ranch in Northern Arizona owned by Amos Thomas, a man who dislikes people with as much, if not more, fervor than Pilar.

Despite her protests, Pilar’s life is transformed at the ranch as she finds peace unlike any she has felt before, and her special bond with the animals astonishes even the most-seasoned ranch hands. Learning to open herself up to the people at the ranch, she develops close bonds with everyone but falls in love with Amos, who wants no part of a relationship. Amos, however, is not prepared for the way Pilar seems to know just what he's thinking and feeling. She knows exactly how to handle him because they are like two halves of a whole.

Encountering one dead end after another trying to locate Pilar, Boone Baker goes to extreme measures to draw her out in the open. In one fell swoop, he crumbles her world around her, destroying what is most precious to her. Will she be strong enough to continue on, or will he get his revenge?

About two years ago, my husband gave me the dream gift, a Kindle. It was love at first sight and my first foray into the world of ebooks. To say the least, I am a technologically challenged person but when a reader, such as I, is told that you can have the book you want to read in seconds, I’m going to do whatever it takes to learn how to use it as quickly as possible.

While I still have books everywhere, I no longer take ten or twelve books with me when I go on vacation. The only thing I need is my Kindle. It never leaves my purse.

My genre of choice is romance with a paranormal twist. My authors of choice are Diana Palmer, Iris Johansen, Catherine Coulter, Jill Gregory and of course, the queen, Nora Roberts. I am also very partial to Michael Connelly, who is not a romance author but damn that man can write!

In my life prior to becoming an author, I was Legal Assistant/Office Manager for a wonderful local estate planning attorney (no criminals that I know of). Prior to that, I also worked my way up the ladder in a large corporation, from payroll clerk to supervising nine employees in operational accounting.

When my children, Shandelle and Pilar, were small, I took a few years off to be a full-time mom and help my husband with his accounting work for his auto repair shop.

After, Michael, my husband, sold his business, he changed professions and started working for a national construction company.

Michael and I raised two beautiful, strong women so that’s who I write about. The women in my books are strong individuals that have moments of weakness and frailty to work through.

This book had a promising start. A bank robber is shot dead by FBI Special Agent, Pilar Campos. The dead man's brother, Boone, vows the ultimate revenge – her death: a life for a life. She is then forced into hiding until such time her safety can be guaranteed. Her boss decides that the ranch belonging to her working partner's brother, Amos, would be the perfect hideout, but Pilar is, independent, argumentative, feisty and not always compliant and somewhat irregular methods have to be adopted in order to get her to the ranch. Once there, despite her annoyance at her abduction (however well-intentioned), she finds herself becoming endeared to her new environment and beloved by all on the ranch; not only is she smart and spunky, but she has an uncanny knack of being able to be 'communicate' with the four-legged residents of the ranch. Beloved by all, however, except Amos himself…….at first.

The story had good components, but I felt the proportion allotted to the somewhat predictable love-hate relationship between Pilar and Amos was greater than it needed to be; I was waiting for the action surrounding the contract on her life by the brother of the man she killed and his attempts to find her, but the drama was rather hurriedly condensed into the last 15-20% of the book and Pilar's reaction to the revenge taken by Boone was not what I would have expected after those nearest, and most definitely dearest, to her were targeted by him.

There were some slightly distracting changes of tense in parts of the story, along with random changes of POV that added to the inconsistency.

I did however like the characters – they were diverse, well-conceived and the balance between the good, the bad, the genial and good-hearted was just right. My instinct however was to get a spoon and stir the novel up a bit to reduce the spicy concentration and add more boil and bubble!

You have subscribed to alerts for Sandy Wolters.

You have been added to Sandy Wolters's favorite list.

You can also sign-up to receive email notifications whenever Sandy Wolters releases a new book.