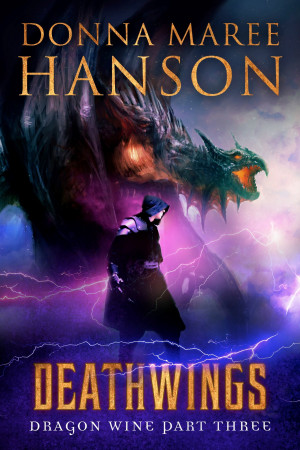 By Donna Maree Hanson
Delicious Dark fantasy!
Deathwings, Dragon Wine Part Three
Life on the ravaged world of Margra is more difficult than ever… Salinda and Garan blasted the evil Gercomo into the sky. Except … he didn’t die, he transformed into a dragon. Final moonfall looms ever closer and the world is on the brink of destruction. More
Deliciously dark fantasy…Deathwings, Dragon Wine Part Three

"Shatterwing has all the fantasy ingredients I love: tormented heroes, a truly twisted villain - and a brand new take on dragons!" Glenda Larke, (award winning author of The Stormlord Trilogy)

"Dark and compelling, with strong characters and a sense of grim inevitability that pulls you along with the story." Craig Cormick, (award-winning author of the Shadow Master Series.)

Life on the ravaged world of Margra is more difficult than ever… Salinda and Garan blasted the evil Gercomo into the sky. Except … he didn’t die, he transformed into a dragon. Final moonfall looms ever closer and the world is on the brink of destruction.
Gercomo’s vile influence spreads among his dragon herd and he is reaching for power in both the human and dragon worlds.

Salinda has the means to stop him and save the world.

Donna Maree Hanson is a traditionally and independently published author of fantasy, science fiction and horror. She also writes paranormal romance under the pseudonym of Dani Kristoff. Her dark fantasy series (which some reviewers have called ‘grim dark’), Dragon Wine, was published by Momentum Books (Pan Macmillan digital imprint). Book 1: Shatterwing and Book 2: Skywatcher are out now in digital and print on demand. In April 2015, she was awarded the A. Bertram Chandler Award for ‘Outstanding Achievement in Australian Science Fiction’ for her work in running science fiction conventions, publishing and broader SF community contribution. Donna also writes young adult science fiction, with Rayessa and the Space Pirates and Rae and Essa’s Space Adventures out with Escape Publishing. In 2016, Donna commenced her PhD candidature researching Feminism in Popular Romance at the University of Canberra. Her first Indie published book, Argenterra, was publishing in late April 2016. Argenterra is the first in an epic fantasy series (the Silverlands) suitable for adult and young adult readers. Donna lives in Canberra with her partner and fellow writer Matthew Farrer. Her new epic fantasy, Argenterra: Silverlands Book 1, is out in 2016. Oathbound: Silverlands Book 2 and The Ungiven Land will be out in 2017.

About the Series: Dragon Wine

How low can humankind sink and is it worth saving?

The Dragon Wine series is set on Margra, a post-apocalyptic world that has been impacted by its moon, Ruel, leaving a devastated planet. Human life is near its end. Chaos rains down from the sky as Shatterwing, the remains of the moon, hurls meteors to the surface with increasing frequency. This chaos is mirrored on Margra, as governments rise and fall and power is won and lost as humankind spirals to its lowest ebb.

Can Salinda and her companions save Margra from final moon fall?

You have subscribed to alerts for Donna Maree Hanson.

You have been added to Donna Maree Hanson's favorite list.

You can also sign-up to receive email notifications whenever Donna Maree Hanson releases a new book.