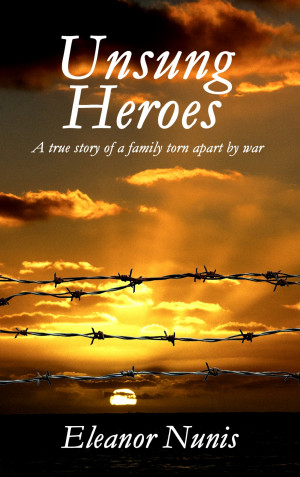 By Eleanor Nunis
A family had to flee Singapore just days before it fell to the Japanese Army in World War II. Captured at sea, the women and children were interned, while their menfolk were sent to the infamous Thailand-Burma Death Railway. Amidst the brutality and horror, there were unexpected moments of kindness shown. This story is about the human spirit and how love and courage shine a light in the darkness. More
A family had to flee from Singapore just days before this former British colony fell to the invading Japanese Army in WWII.

Eleanor was born in Muar, a small provincial town on the west coast of British Malaya, seemingly safe from the horror of war that rages throughout Europe in 1940.

But her world and that of her family were about to descend into chaos as the fall of Singapore signalled the end of the British Empire and also any chance for a normal childhood.

Although too young to remember the detail, Eleanor grew up listening to the stories of her parents and their accounts of life before and after the Japanese occupation of Malaya and Singapore.

From this, she has woven a narrative of her rich family history and the war that engulfs them. Eleanor and members of her family escaped from Singapore, only to be captured at sea on the SS Mata Hari and interned - first in one of the notorious POW camps in Sumatra and then later, in Singapore's Changi Prison. Meanwhile, some of their menfolk are sent to the infamous Thailand-Burma Death railway to suffer untold misery at the hands of their Japanese captors. Amidst the brutality and horror, there were moments of kindness shown, even by the enemy.

Eleanor Nunis was not yet two years old when she and members of her family were captured. They were made prisoners of war during the Japanese occupation of Singapore and Malaya in World War II. She grew up listening to the stories of her loved ones experiences. Eleanor learnt that despite the suffering, deprivation and humiliation they had to endure, there were moments of compassion and kindness, even from the enemy.
The book's title Unsung Heroes, was inspired by Eleanor's mother, who, when talking about the war, would refer to the family members mentioned in the story, as 'my unsung heroes'. It is a touching story written with candour and sensibility of those engulfed in the mayhem of war.
Eleanor, a nurse, was in-charge of the Plastic & Reconstructive Surgery Theatre in Singapore.
When she and her family moved to Melbourne, she worked as theatre supervisor of the Operating Suite at a Private Hospital. Now retired, she teaches piano and has joined a creative writing group. She enjoys writing poems, short stories and articles for newspapers and magazines.
Eleanor has published a book of poems, 'A Time and A Season'. It is about life, with its seasons of joy, pain, service and love.

You have subscribed to alerts for Eleanor Nunis.

You have been added to Eleanor Nunis's favorite list.

You can also sign-up to receive email notifications whenever Eleanor Nunis releases a new book.