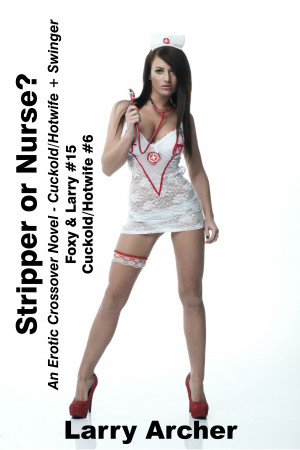 Luckily The Fox's Den has trained all of its dancers in CPR, and they quickly jump into action to save the customer's life. Within minutes, Tom is whisked off to the emergency room after being saved by two strippers.

Tom's wife, Suzanne becomes naturally furious as she feels her husband's heart attack is the fault of the dancers and their nubile naked bodies. But she falls under the guiles of the strip club's owner and realizes her repressed sexuality.

Read along as you learn how this "normal straight" couple falls into the clutches of swingers and their strip club. Stripper or Nurse is a novel size explicit story told in the humorous style that Larry Archer is known for. Virtually every page is dripping with sexual activity of every description told in graphic detail.

"Smut with a plot," is how Larry describes his erotica, which he categorizes as Romantic Erotica, with the emphasis on nonstop Erotica. Written in Larry's humorous style, the stories reflect the positive aspects of their experiences, never with fighting as often seen in other swinger stories.

Stories always include graphic descriptions of the sex to help you fully enjoy the action taking place. None of this "they had sex" shit but well-written descriptions of every detail, leaving nothing to the imagination.

Larry's stories are all HEA (Happily Ever After) except for the times when Foxy puts on her bustier, thigh high leather boots, and grabs her whip. When she has to discipline her slaves, it is always done in a light hearted fashion that will leave you salivating like one of Pavlov's dogs over the pain as the cat-of-9 raises welts across your submissive ass!

As one of Larry Archer's readers commented:
"One word... HOT!!! This was a very well written story. Not your typical shirt sleeve sex story. The story was long enough to keep you engaged and hot enough to make you sweat. I had to stop reading it a couple of times in public because I found myself getting too turned on. Do yourself a favor and either read it in private or have somebody there whom you can make love to because you will get excited. Good work Larry!"

Larry and his wife Foxy have been in the Lifestyle (swinging) for some years, and it has always been a lot of fun for them. He often bases stories upon the situations they've seen, with the names changed to protect the guilty, of course.

Writing adult-themed (erotica) based upon Lifestyle events they've been in is a natural starting point for his erotica. Larry has a vivid imagination and finds it easy to start with a scenario and develop that into a full story. The Archer's travel a lot and have met numerous couples across the country, which provides them with more fodder for his tales.

Also in Series: Foxy and Larry

This is one seriously enjoyable book! The characters are sweet and endearing while still being varied in personality. Suzanne and Tom are the two leads and both are very likable. Though I think I liked Foxy the best. Tom is pretty cool though. I also liked how the book didn’t denigrate him despite his role

The story flows well from one hot scene to another. I never got the feeling anything was dragging or boring. In fact each scene left me wanting more, if you’ll excuse the cliche.

Larry does a great job of inventing new ways to get characters into the good stuff. Nothing ever feels shoe horned or forced in. It all flows, naturally, freely and reads superbly. It’s really incredibly hot from start to finish.

Also if you have a thing for nurses or hospital settings this is your book. I didn’t even know I had such a thing until I read this book!

Concerned about Tom’s welfare, the two girls visit him at the hospital, only to have a run-in with Tom’s rather conservative wife Suzanne. Both jealous and worried, she blames the strip club for her husband’s condition and verbally shreds the young women who actually saved his life. When Suzanne shows up at the strip club to confront the management, she discovers that that the place is not at all what she’d imagined. Instead of a sleazy establishment that takes advantage of women, objectifying them and forcing them into sex, the Fox’s Den turns out to be classy and relaxed, a haven for exhibitionist gals who love showing off. The sensual, sex-drenched atmosphere almost immediately starts to work its magic on the unsuspecting housewife. Before she knows it, she’s fondling the breasts of the scantily clad club valets, wearing scandalously revealing clothing, masturbating in public, and offering her body to men and women alike.

Stripper or Nurse features almost non-stop sex, with a lot of girl-on-girl action and swapping of bodily fluids. At the same time, it’s plotted quite tightly. Larry Archer manages to keep the focus on Suzanne’s enthusiastic transformation from prude to slut. He does an excellent job portraying both her doubts and her irresistible attraction to her new identity as a perpetually-aroused, anything-goes hotwife.

I did find the ending a bit abrupt. Somehow I expected a bit more tidying of loose ends. In the first half of the book, Suzanne keeps talking about a Saturday Couples Night party at the Den, and meeting people who plan to join in the Saturday fun. I expected that to be the big-bang (so to speak) ending, so I was a bit disappointed when the tale ended after a more private sex scene—if you can call a video-recorded butt-fucking “private”!

Anyway, I had a good time, as I almost always do when I enter Larry’s world of good-natured promiscuity. I’m certain I’ll be back.

You have subscribed to alerts for Larry Archer.

You have been added to Larry Archer's favorite list.

You can also sign-up to receive email notifications whenever Larry Archer releases a new book.