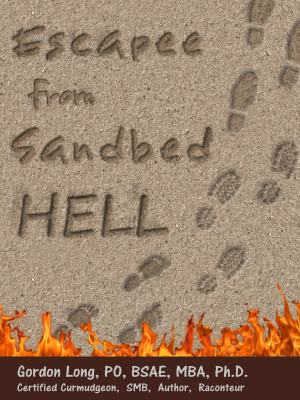 By Gordon Long
"Escapee from Sandbed Hell" chronicles the life of a young man from rural Georgia as he begins exploring the world. It starts in 1950, when he enlists in the Air Force as the Korean War heats up. Poignant and humorous vignettes capture his footsteps as they change from bare feet on the farm through military boots to dress shoes of academia. What a ride! See also: "Livin' PO in Sandbed Hell Redux." More
ESCAPEE FROM SANDBED HELL
J. Gordon Long, PO, BSAE, MBA, Ph.D., Certified Curmudgeon, SMB, Author, Raconteur
Born in Girard, Burke County, Georgia, January 20, 1933. Earned his first degree, PO during his first seventeen years and six months in and around Girard. For those who don’t know, PO is pronounced as POE, like Edgar Allen. Actually who could afford the last two letters of POOR! At about the fourth grade, age ten tender years he began to understand there had to be a better way to live. Gordon had no concept of what a computer was, and neither did anybody else. An abacus was about all he could have pictured in his mind. His older sister must have started the entire progression to his future when she had him accepted as mascot for her graduation. A few of the pictures still exist showing him in his cap and gown in the first grade on the grammar school steps.Miss Mercer, his teacher in the fourth grade hooked him on verbs and reading. He broke away from being just a few economic steps away from becoming a “Share Cropper”. His first book LIVIN PO IN SANDBED HELL, and later the second edition, LIVING PO IN SANDBED HELL-REDUX covered the recalls of life from age zero to July 6, 1950.
On that day he boarded the NANCY HANKS in Millen, Georgia for his first train ride in his life to Atlanta for induction into the United States Air Force. It was late May, 1952 before he returned. Some notable has been credited with “Go West young man, go West.” However, I don’t think he meant to carry that comment all the way to the Far East. After eight months in Japan and eleven months in Korea, he returned as a staff sergeant. Education in the USAF was not formal, but fast and fun. Japan was really fun. Korea, well, not so much. Rest and Relaxation in Japan really, really was great fun to a young stud.
Gordon-that’s me- didn’t start any wars, didn’t end any either. Reflecting on how in the world a person could do the things covered in the Escapee book, and the razor thin edge of how they might have gone awry so many times was amazing. Uncle Sam and the GI Bill worked to nudge me along to an engineering degree, and some really challenging successes. First jobs for engineering was in Research and Development with Texaco, and then field lubrication and deep water marine engineering. Engineering and manager with Gould’s Pumps were upscale positions.. It was clear the next position was at the home office in Seneca Falls, N.Y. Having flunked “Yankee” with Texaco at Texaco”s Beacon Labs, it was time to bail out.
Teaching hydraulics to customers for Gould’s resulted in an interest in teaching at the college level. Back at The University of Georgia for graduate degrees, along with a teaching assistantship and instructorship put me in a classroom. Retirement in the University System of Georgia after thirty four years proves it possible to be an Escapee from Sandbed Hell!!
The cover on this book illustrates foot prints in the sand from bare feet to combat boots to civilized shoes. Academic Regalia still hangs in a closet somewhere. What a ride!!!

Long's first book chronicled his move from being a few economic side-steps away from a share-cropper, into the academic world. LIVIN PO IN SANDBED HELL, and the second edition, LIVING PO IN SANDBED HELL-REDUX cover the recalls of his life from birth to age 17.

Long's second book, "Murder from the Start" is a thriller with an murderous professor as the main character. The book explores the intricacies of the secret life of a mild-mannered hit man and his numerous aliases.

Long's third book, "Escapee from Sandbed Hell" begins when he boards the NANCY HANKS for his first train ride and entry into to the United States Air Force. It recounts Long's coming of age as he shifts through various life stages, including soldier, student, engineer, and professor, and the correllary geographic shifts.

Long threatens to finish writing "Old Capital Murders," another book featuring the murderous professor, who is again meting out his own personal justice on people of questionable ethics and morals.

You have subscribed to alerts for Gordon Long.

You have been added to Gordon Long's favorite list.

You can also sign-up to receive email notifications whenever Gordon Long releases a new book.