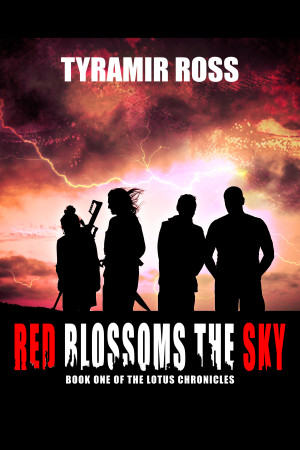 The Lady of the Storms gains the public’s adoration even as she defies its leaders.

The Gargoyle hunts royal prey, and climbs a ladder of blood and bone to power.

Old Man Seirath himself threatens the city with his madness and vision.

A Weapon of Old emerges that may not just upset the balance of power in the city, but threaten to decimate the newly reforged civilization entirely. And it has been stolen.

Tyramir Ross was born with a real name that is not this pen name somewhere in Canada. A recluse and hermit, he prefers that you’d read his book to discover who he is, as that has more clues to his character and psyche than any mundane listing of geographical and historical factoids ever could.

Reviews of Red Blossoms the Sky by Tyramir Ross

There are a lot of post-apocalyptic scenarios I don't particularly care for. Many espouse hope while promising no future, offering zombie plagues and nuclear holocausts that no one living can dream of pushing back. The Lotus Chronicles, instead, gives us a world that's suffered and broken, but humanity keeps on going anyway. Maybe none of the people are particularly good or moral, but that's not the point of humanity, now, is it?

From the start, we're given a slice of life in this broken world that one could probably assume we're going to spend the whole story in. But quickly we go from the oppressed to the oppressors, and then many of the things in-between. We get glimpses of how society continues around the wounds of the apocalypse, complete with bureaucracy, media saturation, and political intrigue.

Futuristic tech (ironically called Old Tech) in the wake of war is barely understood. Most of what is understood is banned for having broken the world. We are denied forcefields and laser guns for crossbows and handguns, while somehow allowed bio-ents and light swords, making for a delightful mix of archaic and sufficiently advanced technology as pirates, monks, and thieves fight cops, soldiers, and slumlords.

In this broken, hobbling world we're given, there's only one true rule, and I found myself repeating it like a mantra throughout my read through.

Never fuck with a Lotus.

Red Blossoms the Sky
A Lotus Novel by Tyramir Ross

The title may suggest the rhyme, “Red sky at night: sailor’s delight. Red sky at morning: sailors take warning,” and one of the novel’s protagonists is an ex-pirate, and currently known as a Lotus, so one could expect to see him blossom. This sets the tone for the novel and it’s a tense one.

The story is set in a dystopian future that is well developed in the first chapter.

There’s plenty of intense action and laugh out loud comedy which I especially enjoy.

If you’re a fan of the genre, this novel will not disappoint. My words don’t do the novel justice. A poet would have been more appropriate.

The struggles the characters go through feel real and personal. The journey is one that keeps you wanting more while paced to keep the reader engaged. And that blossoming of a lotus may just happen to someone you don’t expect, but a keen mind may see it in the foreshadowing that the author uses to cleverly suggest the truth from the beginning.

(reviewed the day of purchase)
Nicolle Schotl reviewed on July 2, 2017

Red Blossoms the Sky has an intriguing premise and pits a number of characters with unique personalities with different personal goals against each other. At times it is hard to tell which are the bad guys and which are the Bad Guys. It is difficult to know who to trust when there are a myriad of psychopaths running around. I really enjoyed this novel.

You have subscribed to alerts for Tyramir Ross.

You have been added to Tyramir Ross's favorite list.

You can also sign-up to receive email notifications whenever Tyramir Ross releases a new book.