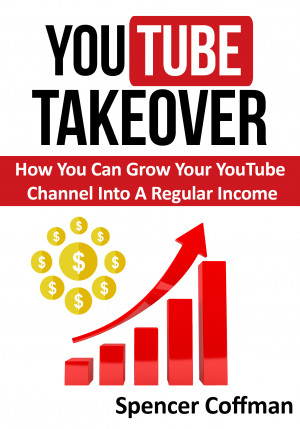 By Spencer Coffman
Inside this book you will learn

What is takes to become a full-time YouTuber
How to improve the quality of your videos
Generating MORE income from your views
Driving traffic to your videos
How and why you should network with other YouTubers
How you can increase subscribers
How to expand, scale and dominate your niche

...and much, much more! More
Discover How YOU Can Generate Income From YouTube Today!

This Guide Will Show You How To Start Earning Money Directly Through YouTube Videos, Without Any Previous Experience!

All of us want to be able to earn an income without having to leave our home. It makes sense right? Who wouldn't want to have the freedom to work when they please and to live a better quality lifestyle?

We've heard the stories of people earning millions of dollars on YouTube and we start to believe that they simply got lucky.

The reality is that thousands of people are generating a full-time income by making YouTube videos!

If one person can do it, another can do it.

We are all capable of earning a solid income online but many of us go about it in the wrong way. If you expect to have full-time results then you need to put in a full-time effort. That means treating YouTube as your business rather than your hobby!

YouTube was designed so that even the least tech-savvy person can get started in creating their own videos. This is also true of making money with YouTube. Google has created the simplest monetization options, where with a couple clicks you can start generating money from the views your videos receive.

I've put together a guide to share my tips to help you create your own income streams from YouTube.

What it takes to become a full-time YouTuber

How to improve the quality of your videos

Generating MORE income from your views

Driving traffic to your videos

How and why you should network with other YouTubers

How you can increase your subscriber rate

How to expand, scale and dominate your niche

Spencer Coffman has a background that proves he can accomplish whatever he puts his mind towards. He received the Presidential Award for Academic Excellence in 2005, at age 12. He then became homeschooled and finished middle school and high school in only three years and was published in the Who’s Who Registry of Academic Excellence for the 2007-2008 year. By age 14 he had diplomas in Professional Locksmithing and Advanced Locksmithing.

In 2008, he enrolled in Alexandria Technical College where he excelled, receiving an Associates degree in Individualized Professional Studies and a diploma in Concrete Masonry all before age 17. He was also a part of the Phi Theta Kappa International Honor Society. While in the Concrete Masonry program, he achieved first place in a local Skills USA competition. He continued onto the state competition where he also received first place. Spencer continued on to the national competition and placed eighth.

Spencer then studied at the American TESOL University to become certified to Teach English to Speakers of Other Languages. He became certified to teach Children and Advanced students. He was then hired by the university to completely re-write and restructure their syllabi and curriculum. In addition, he revised their online platform and made it mobile ready.

When his job there was complete, Spencer began extensively studying micro-expressions, emotions, and behavior. He was a natural and became certified at the expert level in both the Micro Expression Training Tool and Subtle Expression Training Tool developed by Dr. Paul Ekman. Spencer then decided to write a book of his own on body language. “One that would be short and simple. A book that would be very easy for people to pick up and read and understand in no time at all.” In 2015, Spencer published A Guide To Deception, a book that educates readers about deception and teaches them how to detect lies. Since then, Spencer has been working on writing several other books on a variety of different topics. Some of which include eBooks on what he has learned while in business for himself, and books that are designed to help other people live better lives.

Spencer has become an excellent video creator and is proficient in several video editing software tools and other editing programs. He manages several successful YouTube channels and has many online aliases. In addition, he has many different social media accounts and websites for each of them. Spencer has also composed several songs and musical albums that are used in the YouTube videos. In short, Spencer has learned to dabble in almost anything and he pours out his passion, knowledge, and experience for anyone who wants to learn what he has learned.

Spencer has an extensive domain name portfolio, which he modifies regularly depending on which domains be buys and sells at the time. In addition, he creates and manages several different websites and lists them for sale on places like GoDaddy, Sedo, AfterNic, Flippa, and eBay. Spencer is a part of several different affiliate-marketing businesses, he has created and hosted webinars, learned the ins and outs of email marketing, and is always willing and ready to learn something new. Take a look at his website www.spencercoffman.com and check out all of the great resources he has to offer.

You have subscribed to alerts for Spencer Coffman.

You have been added to Spencer Coffman's favorite list.

You can also sign-up to receive email notifications whenever Spencer Coffman releases a new book.