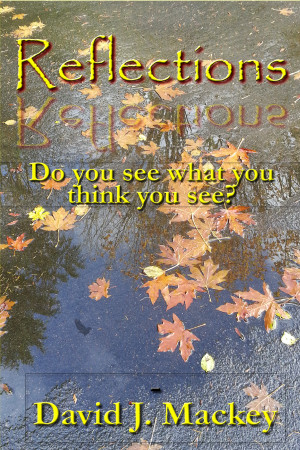 Reflections - Do you see what you think you see?

David John Mackey was born in Potsdam, NY, and raised beside the Racquette River in Saint Lawrence County. Those early years instilled reverence for nature and art that continues to this day. Cameras and pencils became tools of choice for his photography, art, and writing. David lived in the Adirondack region for most of his first forty-five years. He later moved to New England and then the San Francisco area where his writing, photography, and outdoor adventures broadened. He is now living with his wife on the southern end of Puget Sound in Washington State. He continues his photography and writing from this Olympia, Washington home.

"It's all Rough Draft until you die" is David's latest book. Earl, the protagonist, and his experiences of aging. Journal writings and narrative tell the story of the various physical and mental health aspects combined with the challenges of selling their home and downsizing into a smaller apartment in Olympia, Washington. Perhaps you will find inspiration to do your own journal writing as your life continues.

This writer has published his third eBook entitled "Reflections, Do you see what you think you see?" about reflected light giving us visual experiences and also about our reflecting emotionally from image experiences. Reflections offers a mix of the science of light demonstrated in photographs, often mixed with the psychologies of our reactions. Reflections published July 1, 2017.

David published his second eBook entitled "The Sixth Vortex" on March 29, 2016. This fictional story story is about discovering a new energy vortex near Sedona, AZ. (A quick and entertaining read at 10,840 words.)

David's first eBook is entitled "Ponder This" which is an invitation to share his poems, essays and photographs taken over decades of his life. This is an invitation into many of his private thoughts and images collected as his life unfolded in the north east and north west. 2015

You have subscribed to alerts for David J. Mackey.

You have been added to David J. Mackey's favorite list.

You can also sign-up to receive email notifications whenever David J. Mackey releases a new book.