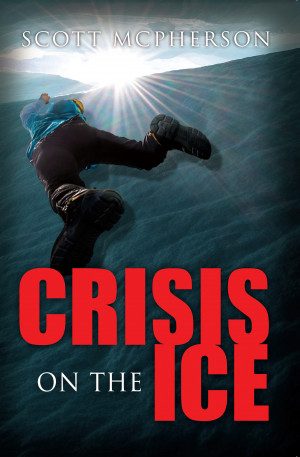 Crisis On The Ice

By Scott McPherson
Intrigue, suspense and a little romance. At last in Antarctica! Gabe Hunter is a scientist who searches for answers deep in the ice. When he and his three graduate students are thrown into turmoil by storms and crevasses, they stumble onto a secret. Their very lives may be at stake. The consequences of failure will not just affect them but possibly the whole world. More
Intrigue, suspense and a little romance. At last in Antarctica, Gabe Hunter and his team of research students go about their work to gather ice cores. Suddenly they are confronted by the appearance of a massive ice crevasse. This is no ordinary crack in the ice, they must travel miles to get around it. Just as they find their way around the obstacle Gabe and his research student discover something so momentous they must get information back to their home base, at McMurdo Station. Before this can be accomplished, they are swept up into an international conflict. The stability of the entire world could be at stake. Not sure they will get help in time, Gabe and his students take some big risks. They aren’t even sure if the whole team will make it out of Antarctica alive.

Aside from loving chocolate and coffee (not necessarily in that order) Scott McPherson has learned that he loves to write. He writes fiction and, so far, has published three novels. Scott has many varied interests, though he tries to focus on one at a time. He has worked for nearly thirty-five years as a family physician, a pass-time that gives him great pleasure and pays the bills. He has five daughters and dotes upon three grandchildren. Recently married, he really loves life.

Scott writes from his life experiences and from travel. His career in the active Air Force was brief, but he served in the Nebraska Air National Guard for over 16 years and retired after over 25 years of military service. His work as a flight surgeon took him on missions in far-away lands. He has spent time in Turkey, Iraq, Spain, Crete and Guam in missions related to support for Iraqi Freedom and Enduring Freedom. He has been to Iceland and Antarctica as well.

Scott has no personal experience with violent death or murder, but has gained knowledge from experts. In his first novel, “A Step Ahead of Death,” his character, Jack Sharp MD, becomes embroiled in a murder mystery. First as suspect, then as amateur sleuth, Jack tries to make a difference. He finds himself right in the middle of an investigation well beyond the scope of a local murder.

A man of faith, Scott traveled to Africa with his small family in the 1980s and served as a medical missionary in Zaire (known as Congo today) with a church organization. The vast difference in what it takes to exist in such an environment served as a basis for much of his second novel, a thriller, “Congo Mission.” His character, Jack, is twenty years younger than in the first novel. In “Congo Mission” Jack serves as a physician in a missionary hospital in the jungles of northwestern Zaire. There he is not only captivated by a young woman visiting the region, but falls victim to his nemesis Jacques Levant. His motivations and faith are tested and his resolve to do God’s work gets pushed to the limit.

When he is not writing Scott enjoys walking, a practice that actually led to his first attempt at writing a novel. He began making notes and writing prose about the mundane things around him. He tried to make the details sound interesting, even though it was just for his own pleasure. Eventually he found that he could expand his prose to “what if?” “What if I just kept walking?” “What if I, or my character, found a dead body in the ditch along the side of the path?” That was the premise for the first novel, "A Step Ahead of Death.”

Scott McPherson is an avid trombone player and has played since he was nine years old. He marched in the Cornhusker Marching Band at the University of Nebraska and now takes advantage of one free football game a year by playing in the half-time show with the UNL Alumni Marching Band. He plays in the Lincoln Civic Orchestra and a community band from the nearby town of Waverly, Nebraska.

Scott loves to sing as well, though his range seems to have diminished in recent years. He has sung in college and church choirs and remembers performing parts of Handel’s Messiah as a highlight of his singing experience. One little-known fact about Scott is that he once sang soprano in a boys choir.

Scott plans to keep writing as long as the ideas flow and others show interest in his stories. He loves to interact with other writers or readers about what has become a passion in his life. Reviews are always welcome as are questions and comments.

You have subscribed to alerts for Scott McPherson.

You have been added to Scott McPherson's favorite list.

You can also sign-up to receive email notifications whenever Scott McPherson releases a new book.