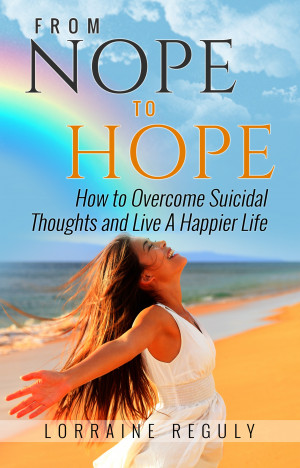 From Nope to Hope: How I Overcame My Suicidal Thoughts (and How You Can Too)

By Lorraine Reguly
From NOPE to HOPE reveals easy-to-accomplish, actionable strategies for changing negative thoughts into positive ones AND for learning to live a happier life. More
Deciding what to do when you are suicidal is tough.

You don't know what to do. You don't know who to turn to. YOU JUST WANT YOUR PAIN TO END.
You don't necessarily want to die; you want to live a better, happier life... one worth living!

From NOPE to HOPE reveals easy-to-accomplish, actionable strategies for changing negative thoughts into positive ones AND for learning to live a happier life.

Some of these include using positive affirmations, visualization, improving your self-image, and setting goals that you can actually accomplish. These strategies (and other techniques) worked for me! I went from a suicidal mess to... a success! In this book, I share all of these with you so that you can move forward with your life and stop feeling horrible. I also provide you with Thought and Action Exercises to do, at the end of each chapter.

YOU CAN CHANGE YOUR LIFE INTO ONE YOU ACTUALLY WANT TO LIVE!

Put my methods to work for you and let me help you transform your life!

Lorraine Reguly was born and raised in Thunder Bay, Ontario, Canada. By age 4, Lorraine was reading, and by age 6, writing in cursive, thanks to the teachings of her mother, an elementary school teacher. She is a writer who loves to read, and a reader who loves to write!

Lorraine has always loved to read; she even used to read in the dark, as a child, by the illumination from the streetlight outside her bedroom window, at bedtime after her parents told her, "Lights out!"

Lorraine Reguly became a certified high school Mathematics and English teacher in 1999, and taught for several years. In 2005, she was in an accident in which she nearly lost her right leg.

In 2013, she started blogging. The very same year, she began to take her writing seriously. She won the only short story contest she ever entered, and became a contributor to a memoir anthology. She now moonlights as a freelance writer and editor, too.

She has plans for many more books, including an autobiographical memoir and a collection of letters she wrote to her son. She also plans to write and publish different works of fiction, including a suspense novel and an erotica novella or two.

You have subscribed to alerts for Lorraine Reguly.

You have been added to Lorraine Reguly's favorite list.

You can also sign-up to receive email notifications whenever Lorraine Reguly releases a new book.