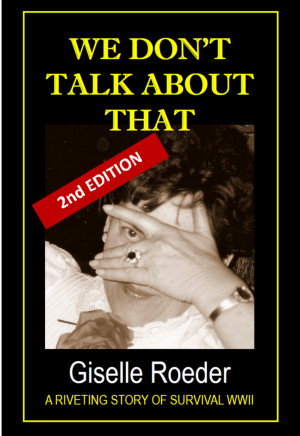 We Don't Talk About That - A Riveting Story of Survival WWII

Giselle Roeder is the author of several books, including ‘We Don’t Talk About That,’ a memoir about her idyllic childhood and the horrific experiences during the Russian invasion, rape and murder family's survival after WWII. She describes three decades of her "life in three Germanys”: First as a child under Nazi rule, then as a teenager growing up in Communist East Germany, and, following her daring escape, life in the West where she had to start all over again.In "Flight Into The Unknown," the sequel to the first book, she tells us the story of her marriage to an (unknown) penfriend from Canada, her immigration, her life as a wife and mother to two stepdaughters and later on a son. Her trials and tribulations, the ups and downs of an immigrant with only a rudimentary knowledge of the English language, and her success in overcoming all obstacles are nothing short of inspiring. Despite all odds and never giving up, Giselle became a successful businesswoman and international speaker. Her husband started an affair, which led to their divorce. She lost everything she had built up in twenty years of marriage. Another beginning and for the reader, another book, the final of her memoirs: "Set Sail for Life After 50" forthcoming in spring 2021. Watch out - it may be even earlier...
These three books form a 'trilogy,' "The Nine Lives of Gila:"
1. We Don't Talk About That, surviving WWII and its aftermath.
2. Flight Into the Unknown - Dreaming of Life and Love in Canada. An immigrant's story.
3. Set Sail for Life After 50 - Another new beginning after a divorce, lots of travel and ending with retirement.

About the Series: The Nine Lives of Gila

Book 1. "We Don't Talk About That. An Amazing Story of Survival." The first ten years under the Nazi regime; Gila had an idyllic childhood on a small farm up to the beginning of WWII. Worst, the invasion of the Russians committing rape, murder and other atrocities. Millions of people were evicted from their homeland; everyone walked for three weeks next to the Russian war machinery on the road to nowhere. The next ten years of life under Communist rule; after a daring escape ten more years in West Germany.
Book 2. "Flight Into The Unknown. - Dreaming of Life and Love in Canada." Manipulated by the well-to-do inlaws into marrying an unknown penfriend, Gila finds herself in her dream-city but had a rude awakening when she had to pay the debts of her new husband. Her limited knowledge of English and all her possessions in a container on the high seas gave her no choice but to accept her fate to be a mother to a young stepdaughter, who was later joined by another and a son. She builds a successful business until all hell broke loose. Start again?
Book 3: "Set Sail for Life After 50 - Age Is Just A Number." This book is a work in progress, September 2020

Also in Series: The Nine Lives of Gila

Review
Dorothy Collins reviewed on May 25, 2021

I enjoyed this very much. It was inspiring as to the events that were mentioned in this book. A true story and very interesting. It was well written and kept you turning the pages. This author is very renowned for her books in this series.

You have subscribed to alerts for Giselle Roeder.

You have been added to Giselle Roeder's favorite list.

You can also sign-up to receive email notifications whenever Giselle Roeder releases a new book.