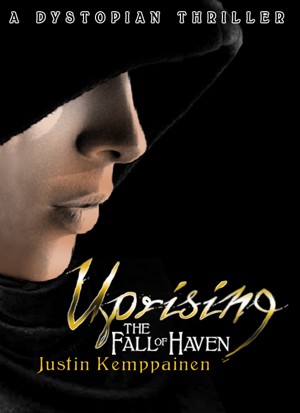 By Justin Kemppainen
Rated 4.45/5 based on 20 reviews
The Citizens of Haven have finally realized their dream; separation. They have ascended. A new layer has been placed upon the city, sealing anyone they deem unfit down below.

In the dark slums beneath the city, something has been set in motion that will usher in a change. Something that will rattle the city of Haven to its core and forever alter the lives of everyone within.
Download: epub mobi (Kindle) pdf more Online Reader
rtf lrf pdb txt
Price: Free! USD
Add to Library
Create Widget
Tags: science fiction dark alternate history citizens haven kemppainen
About Justin Kemppainen

Author of The Legend of Ivan, A Fickle Fate and Haven, Justin lives in the often frigid or sweltering climes of Saint Paul Minnesota with his wife and two cats.

He draws influence from such authors as Orson Scott Card and Dan Simmons as well as from his primary hobby in gaming. His goal as an author is to ferry readers to new worlds, to tell amazing stories, and simply to enjoy the wonders of literature. He is currently working a new novella called A Matter of Life and Undeath, with many other ideas and projects forthcoming.

Reviews of Uprising by Justin Kemppainen

Great read. I have lost sleep, extended work breaks, but I just couldn't stop reading till I got to the end. Great characters, totally compelling plot, well written. What more could anyone say. Great sci-fi.

Fantastic book. Kept me on the edge of my seat the three nights it took me to read; I tried to savour this book, but it was just too good to put down!

(review of free book)
Loopy Cooney reviewed on April 3, 2012
(no rating)
I loved this book and was glad to see the sequel. I thought this was a different book as the one I read was just called Haven. I thought maybe this was a book before that so purchased it only to realize its the same book with a different name...grrrrrrrrrrrr.

(reviewed the day of purchase)
Nicki Johnson reviewed on Feb. 6, 2012

I loved this book. Very well written. I can't wait to read the sequel and other books by this author. Well done!

I loved this book. I was in the middle of reading two others when I opened it up on my Kindle to rid my mind of the lack of true plot I had been stumbling through, and was drawn in from the beginning. The dystopic nature of the book reminds me of "Brave New World" and has the story line moving from not only the higher level Citizens point of you but also the rabble of the forgotten. The story moves at a quick pace so you don't get bogged down too much in introspective nonsense that would throw off the true action of the book. I would highly recommend it to anyone who enjoys a futuristic dystopia novel.

Solid concept and certainly interesting enough to keep you reading. Sadly, as with some other titles on here, it hasn't been properly proofread and there are many grammar errors and missing words. I'm also assuming from the rather abrupt ending that there is a sequel.

Most characters were well developed and multi-dimensional, not always doing what you expected and not all good or all bad. I especially enjoyed the development of Michaels - very believable.

Not too "saccharine", and therefore more believable and unpredictable.

An excellent read - I had trouble putting it down.

A bit too violent for my taste; a few characters too stereo-typically "bad" and several scenes too predictable; "science" not super believable (although you're usually too caught up in the action to notice.)

Many others have already said what I think, but I felt it worth saying again.

The book was very well written, not just for a first novel, but for any novel. The dialog and charactors are believable, and the action easily kept my interest. All in all a well written novel.

The bad? Well, the science of the book was pretty thin and unbelievable, as well as some of the social aspects. However, that didn't prevent me from really enjoying the read, and looking forward to the sequel. Fiction doesn't have to be believable to be fun to read!

It's free - I love sci-fi, from Heinlen to Philip Dick, but found the themes in Haven more akin to Orwell. In fact almost identical to those Orwell explored over half a century ago with some modern touches. Think 1984 meets Escape from New York. That's not really a reason not to read this - Kemppainen's written a good book with plenty of substance - just no subtlety. And perhaps because I enjoyed Orwell the first time around I found this allegory a little heavy handed.

This is one of those books that doesn't fall squarely into the sci-fi category - in fact there are very few sci-fi elements and those that are there have no real basis in science. Instead they exist to underpin a social commentary on the evils of a Utopian society. Haven is trapped by the very things that keep it protected and flourishing. It's a construct, a mish mash of elements and you'll have to suspend logic and reason if your going to believe in Haven's universe. Fortunately, for the most part, Kemppainen's engaging style keeps you from questioning the how or why too closely.

What was good? Plenty - the action sequences are excellent and I'm guessing Kemppainen is American because there's lots of guns and exotic weapons with a never ending supply of bullets - oh they threaten to run out but they never quite do. The body count is suitably high - Hollywood take notice. Most of the lead characters are well written if a little one dimensional, the Russian is very Russian and the drug dealer is, naturally enough, evil to the core and a mysoginist to boot. I just wish Kemppainen had dared to let his characters dream of bigger things at times, but I'm sure he was going for that claustrophopic feel - it keeps you reading wanting to see the characters break out of their myopic mold. Unfortunately only one does; a beautifully written epiphany for one of Haven's finest - perhaps the most human element in the book. This character grows and matures as social veneers are stripped away by circumstance to reveal an underlying humanity.

Unlike others I didn't mind the ending. It was poetic and quick. Three stars but Kemppainen is going into the charts with a bullet next to his name.

(review of free book)
J.A. Apol reviewed on Nov. 17, 2010
(no rating)
Really enjoyed the story as a whole. Hooked straight away into the characters and storylines. Found the style easy to read, very visual and engaging. A bit disappointed in the ending, however. I'd definitely read Kemppainen again.

You have subscribed to alerts for Justin Kemppainen.

You have been added to Justin Kemppainen's favorite list.

You can also sign-up to receive email notifications whenever Justin Kemppainen releases a new book.