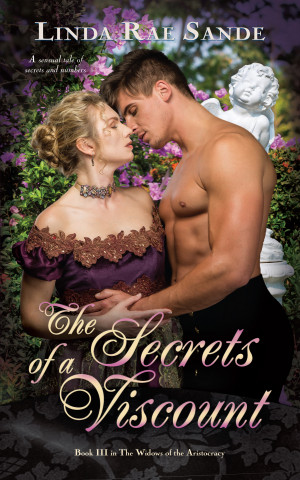 The Secrets of a Viscount

If he can just get it right.

Meanwhile, Adam Comber, Viscount Breckinridge, has finally decided it’s time to marry—or perhaps a pending deadline has him motivated to find a bride. Why not the very first woman he spots from the bow window at White’s? He may not be the best at mathematics, but he's pretty sure she's got his number.

As an arithmetic teacher and dance instructor at a finishing school, Diana Albright has a secret she’d rather the ton not learn, especially the rather handsome man who has just informed her she will be his bride. What a bounder! Of course his proposal is just a lark.

Does the viscount really intend to take her as his wife? Some numbers just don't quite add up in "The Secrets of a Viscount".

A self-described nerd and lover of science, Linda Rae spent many years as a published technical writer specializing in 3D graphics workstations, software and 3D animation (her movie credits include SHREK and SHREK 2). An interest in genealogy led to years of research on the Regency era and a desire to write fiction based in that time.

A fan of action-adventure movies, she can frequently be found at the local cinema. Although she no longer has any tropical fish, she does follow the San Jose Sharks. She makes her home in Cody, Wyoming. For more information about her books, go to her website: www.lindaraesande.com.

About the Series: The Widows of the Aristocracy

Also in Series: The Widows of the Aristocracy

You have subscribed to alerts for Linda Rae Sande.

You have been added to Linda Rae Sande's favorite list.

You can also sign-up to receive email notifications whenever Linda Rae Sande releases a new book.