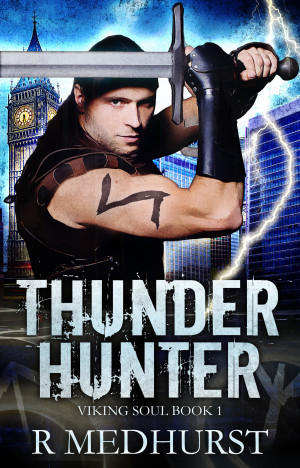 Rated 3.00/5 based on 1 reviews
Being the human grandson of Thor, God of thunder, has been a curse.

When he was slain a thousand years ago, I was imbued with his thunder and given a mission: Go to Earth and send two hundred escaped Fallen Ones back to hell, or be the reason Thor stays dead forever. More
Being the human grandson of Thor, God of thunder, has been a curse.

When he was slain a thousand years ago, I was imbued with his thunder and given a mission: Go to Earth and send two hundred escaped Fallen Ones back to hell, or be the reason Thor stays dead forever.

A millennium later, I’m in London with only five Fallen Ones left to be destroyed before Thor can be resurrected. Living in the human world for so many years has poisoned me. Even Chloe, another descendant of the Gods, who was sent to help me, sees that I’m succumbing to the poison. I can’t waste time. If I don’t find the next Fallen One before it’s too late, the darkness he breathes into the underworld may ruin me for good.

Rachel writes YA/NA fiction that also appeals to adults. She wants to bring hope, excitement and feeling through her work. An avid reader herself, she loves to get lost in a book. There's no point in trying to get her to do anything else when she's lost in reading. Writing is Rachel's passion. She's been writing for many years and finally took the plunge in getting her work out there.

Rachel loves to interact with readers, so please look her up on her social media, where she would love to chat.

Thunder Hunter starts off many years ago, with Loki and Thor fighting. Freya is there too, plus many others, all of whom will die unless something changes. What changes is Loki kills Thor, but Freya puts Thor's power inside his grandson. Trygger must find all of the Fallen Ones before he can die, no matter how long it takes. Once that has happened, Thor will live, and Trygger will die at last, and live among the gods. Fast forward a few years, and Trygger only has five more to find. He as lived through many assassination attempts by Loki's descendants, and has killed more than his fair share too. And then Freya decides she will help him, by sending one of her descendants, Chloe.

I have to be honest, there were parts that I really enjoyed in this book, but there were also parts that I didn't like. Trygger has been by himself for a long time, and has focused only on completing his task so that he can die. Along the way, he has lost most of society's "niceties", but that doesn't stop EVERY. SINGLE. WOMAN. from throwing herself at him. Even if her job is to kill him! Sorry, but I don't get that bit. Also, he said that he never had women stay over at his place, but he has on hand a little black dress from someone he has killed just lying around!

This was an enjoyable book if you don't look to deeply at it. I'm not entirely sure where the story is going, which is a good thing, but I don't think I'll be reading any further along. If you enjoy tales of Norse mythology though, I would definitely recommend it to you.

* A copy of this book was provided to me with no requirements for a review. I voluntarily read this book, and my comments here are my honest opinion. *

You have subscribed to alerts for Rachel Medhurst.

You have been added to Rachel Medhurst's favorite list.

You can also sign-up to receive email notifications whenever Rachel Medhurst releases a new book.