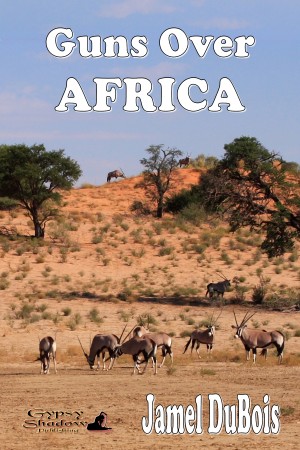 By Jamel DuBois
Rated 4.00/5 based on 1 reviews
Author/world traveler/big game hunter, Jamel DuBois, shares his safari experiences in southern Africa. More
Guns Over Africa is an affirmation of sport hunting, and in this context, hunting that contributes to the economy of developing countries within the rules of international wildlife conservation and preservation. This does not mean that the hunter cannot enjoy the sport; it’s not all high-minded and only for these obvious commercial and conservation benefits for other than the hunter himself (or herself). For the hunter, trophy mounts and memories resulting from such experiences flash back the challenge, the competition, the failures, the successes, the remorse, and the elation of the hunt. And they make last year, or before, when the animals were taken, seem not so long ago, and make the next hunt seem not so far away. Settings for these safari accounts are Zimbabwe and South Africa.

Jamel DuBois was born in a grassy ditch somewhere along an Arkansas back road, and the adventure could only get better. He left home at age seventeen, crossed the country by rail and tore up his return ticket. He joined the Navy, and found that oceans are gateways not barriers. He became a magazine editor, then a world traveler and a big-game hunter. He dispatched a wild boar in hand-to-hand combat, and faced down a Cape buffalo in a horn-to-belt buckle encounter. He has set foot in six dozen countries on six continents, wrote numerous articles for many of the guns and hunting magazines, and writes killer novels authentically set in South Africa.

Anyone interested in African safaris, or planning one will find this book a good read. It covers a lot of hunting outfitters he hunted with, and what animals are available, while recounting the hunts in which he filled his trophy walls.

You have subscribed to alerts for Jamel DuBois.

You have been added to Jamel DuBois's favorite list.

You can also sign-up to receive email notifications whenever Jamel DuBois releases a new book.