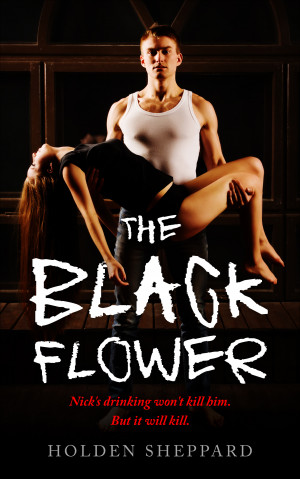 By Holden Sheppard
Rated 5.00/5 based on 2 reviews
Nick’s a binge-drinking redneck; Ashlea’s a wild party girl. It’s a perfect match – until it isn’t. When tragedy strikes, Ashlea grows up fast. But Nick can’t escape the booze – or the ghosts of his childhood.

With Nick out of control, Ashlea delivers an ultimatum – with deadly consequences.

THE BLACK FLOWER is a raw portrait of teenage chaos. It was originally published in Page Seventeen. More
When Nick and Ashlea first meet, they’re just two drunk seventeen year olds at a house party. He’s a binge-drinking redneck; she’s a wild party girl. And every weekend in a country town like Geraldton is an alcoholic’s dream.

It’s a perfect match – until it isn’t.

When tragedy strikes, Ashlea grows up fast. But Nick can’t pull himself away from the booze – or the ghosts of his childhood that echo through every part of his life.

With Nick’s addiction threatening to destroy their young love, Ashlea delivers an ultimatum – but it has deadly consequences.

It only took Holden Sheppard two summers of working as a labourer for his father's earthmoving business to realise he wanted something different from life. At 18, he packed up everything he owned (including a pogo stick and a bunch of mix tapes), left his hometown of Geraldton, Western Australia and drove his '91 Nissan Pulsar four hours south to the state's capital, Perth, to pursue his passion for writing.

After a rough landing at university - learning literary theory was a world away from digging trenches and laying pipes - Holden eventually found his feet. Studying a Bachelor of Arts, majoring in Writing, he was listed as one of the Top 100 students at Edith Cowan University, achieved the highest overall mark in the course and graduated with First Class Honours in 2013.

​After winning a prestigious ArtStart grant from the Australia Council for the Arts in 2015, Holden began work on his first full-length book. In 2016, he undertook a mentorship through the Australian Society of Authors to develop his manuscript, a Young Adult novel. His short fiction has been published in Indigo Journal and page seventeen, and he has also written for the Huffington Post, the ABC, DNA Magazine and FasterLouder. Holden has three short stories available as free eBooks through all major eBook retailers.

When he's not writing, Holden works as a copywriter and sessional lecturer at Edith Cowan University. In 2017, he became the Vice President of the Peter Cowan Writers’ Centre in Joondalup.

Holden has always been a walking contradiction: a gym junkie who has played Pokemon competitively; a sensitive geek who loves aggressive punk rock; and a bogan who learned to speak French. He is the only writer he knows who has switched to decaf and lived to tell the tale, and he's quit smoking more times than he cares to admit.

Reviews of The Black Flower by Holden Sheppard

Such a good story. Your use of language is amazing and so descriptive. You made me feel really sorry for Nick after getting more insight into his life. Very sad but interesting read.

This story was very interesting. It was incredibly insightful. Your writing is also excellent!

You have subscribed to Smashwords Alerts new release notifications for Holden Sheppard.

You have been added to Holden Sheppard's favorite list.

You can also sign-up to receive email notifications whenever Holden Sheppard releases a new book.