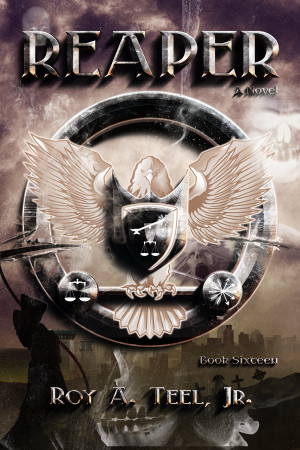 “Who the hell is Reaper?” The murder of federal witness Alexander Felton, known as “Felt,” would not be news if it weren’t for the fact that his brutalized body was discovered in his prison cell in Los Angeles Prison where federal authorities were trying to hide him. Felton was murdered by a hitman known only as Reaper. More
“Who the hell is Reaper?”

The murder of federal witness Alexander Felton, known as “Felt,” would not be news if it weren’t for the fact that his body was discovered in his prison cell at the Los Angeles State Prison where federal authorities were trying to hide him. Felton was a bad guy in his own right, but he ended up the target of a notorious hitman known only as Reaper. FBI Special Agents John Swenson and Chris Mantel are called in to investigate the killing, and while on-scene in a secure state prison sorting through Felton’s murder, Reaper strikes again right under their noses. The race is on to stop this professional hitman that no one has ever seen as he methodically assassinates key witnesses in a high profile federal case and who also has the Iron Eagle in his sights.
Flap matter:

The Los Angeles U.S. Attorney’s Office has been attempting to prosecute notorious Mexican drug lord and kingpin Marco Espranza for over a decade. Assistant U.S. Attorney Stewart Feldman tried unsuccessfully to convict him, only to have juries tampered with, witnesses disappear, and threats made on his life. His lack of success and appointment to U.S. Attorney for Los Angeles have forced him to turn the case over to his second-in-command Candice Polk.
Polk is trying Espranza for the fifth time and feels she has the case to get a conviction. But threats turn to reality when Feldman and his wife are gunned down at a Santa Monica restaurant by a professional hitman known only as Reaper. The murders quickly spin the city and government out of control, and it’s up to the Iron Eagle to find Reaper before he completes his list of kills, including the Eagle himself.

***Content Warning: While the Iron Eagle Series can be read out of order as a stand-alone novel, the reader should be advised that backgrounds and details of the characters may be confusing if the reader choose to do so, as this series has a natural maturation. The Iron Eagle Crime novel series contains mature subject matter, graphic violence, sexual content, language, torture and other scenes and subject matter that may be disturbing to sensitive readers. This series is not intended for anyone under the age of eighteen, reader discretion is advised.***

Reaper: The Iron Eagle Series Book Sixteen
“I know that the slice of my blade is unpleasant to you it won’t hurt for long, it’s nothing personal it’s my job.”

Also in Series: The Iron Eagle

You have subscribed to alerts for Roy A. Teel, Jr..

Would you like to favorite Roy A. Teel, Jr.?

You have been added to Roy A. Teel, Jr.'s favorite list.

You can also sign-up to receive email notifications whenever Roy A. Teel, Jr. releases a new book.