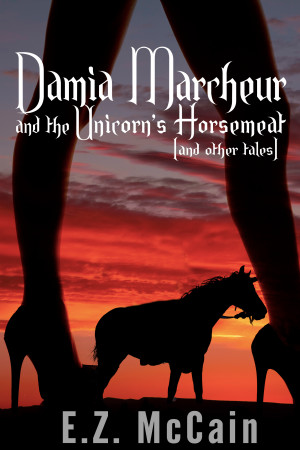 Damia Marcheur and the Unicorn's Horsemeat (6 Stories of Magical Bestiality)

Rated 5.00/5 based on 3 reviews
Warning: Contains 10,000 words of hot monster-on-witch action! Bookish 18-year-old Damia Marcheur is a schoolgirl at the world's premier school for magic. She's also under a curse that makes her irresistible to magical creatures! Watch as Damia screws her way through a veritable bestiary of legendary creatures — this time including a unicorn, a minotaur, a kraken, and more! More
Warning: Contains 10,000 words of hot monster-on-witch action!

Bookish 18-year-old Damia Marcheur is a schoolgirl at the world's premier school for magic. She's also under a curse that makes her irresistible to magical creatures! Watch as Damia screws her way through a veritable bestiary of legendary creatures, one monster at a time! In this collection:

- A unicorn’s been sighted in the area — and unicorns are hot for “maidens!" But Damia’s no maiden. She thinks she’s safe to go in the woods… but she's about to learn otherwise the hard, wet way!
- Damia finds herself in the wrong part of a labyrinth —with a very horny minotaur!
- Damia has to deal with a Japanese kappa, a talking horse and her own randy roommate — all on top of the new horsecock she’s grown overnight…
- Damia’s attempt to petsit a legendary cockatrice gets her paralyzed, on all fours — and at the lizard's mercy!
- A spell goes wrong — letting a horny tentacled monster into our reality!
- Damia’s hired to train her teacher’s three-headed cerberus. Only it turns out that heads aren’t the only thing he’s got three of…
Available ebook formats: epub mobi pdf lrf pdb txt html
First 30% Sample: epub mobi (Kindle) lrf more Online Reader
pdb
Price: $4.99
$3.99 USD
Buy with coupon Use the code BK72P at checkout for 20% off
(Offer good through Feb. 01, 2021 )
Have a better coupon?
Add to cart, then apply your coupon
Add to Library Give as a Gift (using coupon)
Have a better coupon?
Add to cart for gifting, then apply your coupon
How gifting works
Create Widget
Tags: fantasy witch minotaur unicorn tentacles schoolgirl bestiality kraken zoophilia barely legal
About E.Z. McCain

About the Series: Beast-Banged Schoolgirl

An 18-year-old schoolgirl at a school for witchcraft gets boned by magical animals — whether she wants to be or not!

About the Series: E.Z. McCain's Beastiverse

A modern-day fantasy universe where human women get fucked by magical beasts and beastmen!

This series is a really great read. When I first read E. Z. McCain's work, immediately I knew this was a writer I wanted to support. They're really good at keeping the content fresh and leave enough for the reader to fill in. Really a good read and I know I will definitely re-read the series.

Unlike many stories in the genre, Damia Does the Teachers' Pets shows a lot of research into the origins and history of many of the monsters used...and totally turn then on their heads so Damia can blow them better! Joking aside there is a great deal of noticeable research done that makes the stories and their characters blend in smoothly with the world at large which makes it all the more easier to immerse oneself in the filthy filthy perversion they entice you with.

This is another great piece in an ever growing series that is work the read.

(reviewed the day of purchase)
Rich Humus reviewed on July 26, 2017

Mz. McCain has tapped into a vein of sexy adult erotica rarely attempted in the past, and almost never done with the genitalia-arousing style we see here. Fanciful, dare I say almost humorous, with sly word play and easily-visualized action, her heroines and beastie fellows cavort across a landscape that Harry Potter would be aghast to see,but which, perhaps, Hermione would fall reluctantly into.
Almost scientific in part, the well constructed setups and bestial descriptions are just far enough out of the range of sensibility to be accepted, with enough disbelief suspended, without being comic-book outlandish. Yes, we all know that horse-men and werewolves aren't real. But if they WERE real, it would be great to imagine they'd be rapacious lust-monsters, rather than flesh-devouring zombies.
The sex is explicit enough to satisfy even the most jaded of the so-called "raincoat crowd", and yet might still, in this reviewer's estimation, appeal to most females. I think the unbelieveability of the scenes allows our fantasies to go wild, without repercussion.
I highly recommend this author and all of her works, as both a detour from the standard and omnipresent styles of written porn, and as an example of well-written, intelligent erotica with style, colorful and descriptive content.
Five stars is simply not enough. I'm thinking, maybe Milky Way?

You have subscribed to alerts for E.Z. McCain.

You have been added to E.Z. McCain's favorite list.

You can also sign-up to receive email notifications whenever E.Z. McCain releases a new book.