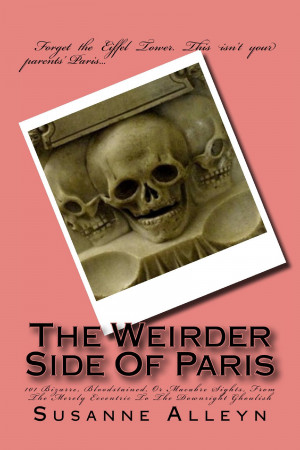 The Weirder Side Of Paris: A Guide to 101 Bizarre, Bloodstained, or Macabre Sights, From the Merely Eccentric to the Downright Ghoulish

By Susanne Alleyn
There's a lot more than the Catacombs for fans of the bizarre or macabre to explore in the weirder (and darker) side of Paris that most tourists never see. With information on dozens of bizarre and sometimes gruesome sights, artworks, museums, and historical locations, The Weirder Side Of Paris is an indispensable guide to the city that you never knew existed. More
Welcome to the weirder (and darker) side of the City of Light.

You've probably visited—or plan to visit—the Paris Catacombs. But for history buffs, travelers trying to escape the overcrowded "must-sees," and fans of the bizarre, macabre, or morbid, there's a lot more than the Catacombs to explore in the offbeat, often creepy side of the city that most tourists never see.

Forget all the clichés about romance—the most romantic sight you're likely to find in this oddball, grim, or gory Paris will be a tombstone. In these pages you'll discover the city's stranger secrets and grislier history, from the sites where the guillotine did its bloody work, to the graves of its victims; from the Louvre's forgotten medieval basement to a Métro station that celebrates potatoes; to statues of Death, a stroll through the sewers, and an irreverent look at some of the oddest (and ugliest) tombs in the famous cemeteries. With background and practical information for over a hundred bizarre and sometimes gruesome sights, weird artworks, wacky museums, and out-of-the-way historical locations, many free to visit, The Weirder Side Of Paris is an indispensable guide to the city that you never knew existed.
Available ebook formats: epub mobi pdf lrf pdb txt html
First 10% Sample: epub mobi (Kindle) lrf more Online Reader
pdb
Price: $2.99 USD
Buy Add to Library Give as a Gift
How gifting works
Create Widget
Tags: paris france history trivia cemetery guide paris museums weird history bloody events paris tourism weird art gore and blood offbeat travel
About Susanne Alleyn

Susanne Alleyn has loved history all her life, aided and abetted by her grandmother, Lillie V. Albrecht, an author of historical children's books in the 1950s and 60s. Happy to describe herself as an insufferable knowitall about historical trivia (although she lost on Jeopardy!), Susanne has been writing and researching historical fiction for nearly three decades. She is the author of A Far Better Rest, the reimagining of A Tale of Two Cities (Soho Press, 2000); the four Aristide Ravel Mysteries (St. Martin's Press); and The Executioner's Heir: A Novel of Eighteenth-Century France.

Nonfiction includes Medieval Underpants and Other Blunders: A Writer's (& Editor's) Guide to Keeping Historical Fiction Free of Common Anachronisms, Errors, & Myths (2012); A Tale of Two Cities: A Reader's Companion (2014); and The Weirder Side of Paris (2017).

Reviews of The Weirder Side Of Paris: A Guide to 101 Bizarre, Bloodstained, or Macabre Sights, From the Merely Eccentric to the Downright Ghoulish by Susanne Alleyn

You have subscribed to Smashwords Alerts new release notifications for Susanne Alleyn.

You have been added to Susanne Alleyn's favorite list.

You can also sign-up to receive email notifications whenever Susanne Alleyn releases a new book.