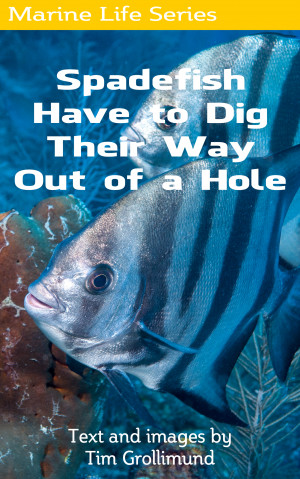 Spadefish Have to Dig Their Way Out of a Hole

Once you spot a school - even a small one of a dozen or so - the best way to photograph them is to let them come to you. If you chase them, they will turn the other way. If you like to take tail shots, then by all means pursue at your leisure. Usually within two or three minutes they will swoop down to check me out. Their effortless glide path through the water column as they approach is worth the wait. Even though two or three minutes may feel like twenty as you monitor gauges and depth, hang out. They will come.

There are not many studies on the reproductive life of spadefish. They spawn from May to October, and water temperature and salinity are factors in the behavior patterns, as expected. Perhaps the cold spell that damaged many other species had an effect on spadefish, too. I’m just guessing.

I decided to dig a little deeper into my post-Deep-Horizon theory. I found a thesis by Mark Stead of Louisiana State University, from 2003. He studied the effects of nonlethal doses of ethylene glycol (EG) and methanol (MeOH) on juvenile pompano and spadefish. For spadefish, up to an eighteen percent reduction in swimming ability was observed after ingestion of EG. There was a greater reduction for pompano.

EG and MeOH are used extensively in oil production. In his thesis, Mr. Stead says “the possibility of a large spill is unlikely”. Oops. Tell that to BP. Did the spill effect the critical swimming speed of juvenile pompano and spadefish? I think it’s a great question to ask the scientists assessing our fisheries in a post-spill world. "

Price: $2.99
$1.20 USD
Buy with coupon Use the code AGB60 at checkout for 60% off during our site-wide promotion!
(Offer good through May 31, 2020 )
Have a better coupon?
Add to cart, then apply your coupon
Add to Library Give as a Gift
How gifting works
Create Widget
Tags: florida keys scuba diving marine life marine biology underwater photography marine science molasses reef marine sanctuary reef conservation spadefish
About Tim Grollimund

Tim is based in Key Largo, Florida. He wrote the scuba diving column for the local newspaper, The Reporter, for over three years, and also served as a Working Group member and Alternate Representative on the Florida Keys National Marine Sanctuary Advisory Council. His ebooks are all based on his newspaper columns. Each ebook has a collection of underwater images shot by Tim. The ebooks cover a wide range of marine life species and ocean conservation topics.

You have subscribed to alerts for Tim Grollimund.

You have been added to Tim Grollimund's favorite list.

You can also sign-up to receive email notifications whenever Tim Grollimund releases a new book.