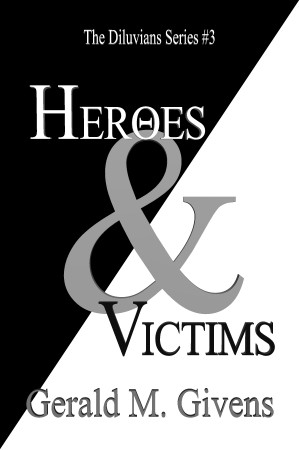 The Diluvians series concludes in this daring adventure across time, space, and death to save mankind once more from the vengeance of gods.

I grew up in Ann Arbor, Michigan where from an early age my interests in history and storytelling were built through frequenting museums with my mother. At age eight, I wrote my first story, Tim, Tom & Sam, a children&#39;s tale about a dog, a cat, and a mouse that became friends and lived together. In high school, my interest in writing grew through the study of poetry. Inspired by the poems of Edgar Allen Poe, I began writing poetry and eventually self-published an anthology of my work. At Western Michigan University, I wrote my first novel, Eyes in Atlantis, and I&#39;ve been writing ever since.

Primarily interested in all things fiction, I gravitate toward Science Fiction and Fantasy as my reads of choice. My favorite novels include:
- The Lost World by Michael Crichton
- Siddhartha by Herman Hesse
- A Song of Ice and Fire Series by George R.R. Martin

Also in Series: The Diluvians

You have subscribed to alerts for Gerald M. Givens.

You have been added to Gerald M. Givens's favorite list.

You can also sign-up to receive email notifications whenever Gerald M. Givens releases a new book.