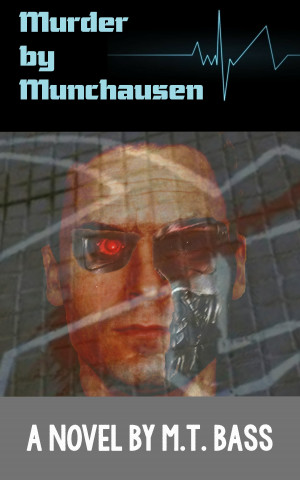 By M.T. Bass
Rated 4.00/5 based on 1 reviews
A police procedural thriller ripped from future headlines!

Artificial Evil has a name…Munchausen.

When androids are reprogrammed into hit men, detectives of the Artificial Crimes Unit repo the AnSub and track down the hackers.

“…a great story that blended a couple genres together beautifully. I easily fell into the story and didn’t want to quit until it abruptly ended. I’m really glad that I have the next book in the series. I can’t wait to see what Jake, EC, and Maddie get into next.” – J.D. Bronder Book Reviews (4 of 5 Stars)

“The pace of the book was fast and there were several interesting characters to meet along the way…You’d better take a deep breath before you dive into this one.” –Frank Frission Reviews (4 of 5 Stars)

After Jake shoots and kills a murder suspect who turns out to be the son of a powerful city councilman, he finds himself demoted to the Artificial Crimes Unit, tracking down androids hacked and programmed to be hit men.

When his case of an “extra-judicial” divorce settlement takes a nasty turn with DNA from a hundred-year-old murder in Boston and a signature that harkens back to the very first serial killer ever in London, Jake finds himself tangled up in the brutal slayings of prostitutes being investigated by his former Robbery/Homicide partner, Maddie–who is now his lover.

"It might not make sense, but the beloved Media tags it 'Murder by Munchausen.' For a price, there are hackers out there who will reprogram a synthoid to do your dirty work. The bad news: no fingerprints or DNA left at the crime scene. The good news—at least for us—is that they’re like missiles: once they hit their target, they’re usually as harmless as empty brass. The trick is to get them before they melt down their core OS data, so you can get the unit into forensics for analysis and, hopefully, an arrest." [excerpt from Murder by Munchausen #1]

Artificial Evil has a name…Munchausen.

M.T. Bass is a scribbler of fiction who holds fast to the notion that while victors may get to write history, novelists get to write/right reality. He lives, writes, flies and makes music in Mudcat Falls, USA.

Please visit my author's web site for more information and what I'm working on now.

The narrator, Jake, and his partner, MC, have been assigned to the Android Squad, the lowest spot in the Cleveland Police pecking order. Jake’s girlfriend, Maggie, is a detective in the Robbery/Homicide division. When their cases intersect, it becomes crucial to figure out who is reprogramming the androids, turning them into assassins.

This short novel zips along with lots of action, lots of interesting inter-personal interaction, and lots of geeky events.

It’s not clear exactly when the story is set—several hundreds of years or more in the future. There are near-perfect androids and a surveillance system that keeps track of where everybody is at all times. However, most of Cleveland, its buildings, its transportation system, its layout, hasn’t changed much in those years. Transportation is still primarily by cars—though they have auto-pilot features now—and freighters still squeeze around the tight bends of the Cuyahoga River to deliver ore. A somewhat hybrid world, but that didn’t detract from the story.

The title of the novel draws a parallel between the evil person/entity programming the androids to be assassins and the mental disorder called Munchausen Syndrome by Proxie, in which the disordered person causes harm to another person (someone in their care, most often a child) in order to draw pity and sympathy to themselves. It’s not clear that the analogy fits. There may be some other connection to “Munchausen” that I’m not aware of.

You have subscribed to alerts for M.T. Bass.

You have been added to M.T. Bass's favorite list.

You can also sign-up to receive email notifications whenever M.T. Bass releases a new book.