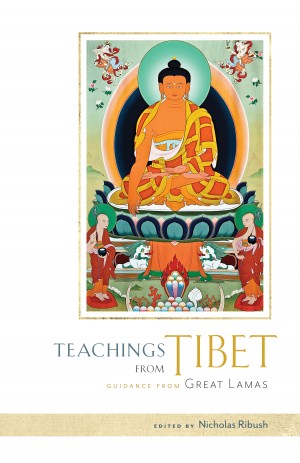 By Nicholas Ribush
This title contains teachings from His Holiness the Dalai Lama, Kyabje Ling Rinpoche, Kyabje Trijang Rinpoche, Khunu Lama Rinpoche, Tsenshab Serkong Rinpoche, Song Rinpoche, Geshe Lhundub Sopa, Geshe Rabten, Gomchen Khampala, Geshe Ngawang Dhargyey, Gehlek Rinpoche, Lama Thubten Yeshe and Lama Thubten Zopa Rinpoche. More
Back in the 1970s and ‘80s most of the great lamas to leave Tibet were still alive and teaching. Those of us who had the good fortune to be in India and Nepal at that time were able to benefit by sitting at their feet, drinking in the nectar of their holy speech. Many of the teachings in this book were given at Tushita Mahayana Meditation Center, New Delhi. Two of His Holiness the Dalai Lama’s teachings were published in a souvenir booklet issued for Tushita’s Second Dharma Celebration, November 1982, the first at which His Holiness spoke. Three of the others are from unpublished manuscripts.

This title was published by the Lama Yeshe Wisdom Archive, a non-profit organization established to make the Buddhist teachings of Lama Yeshe and Lama Zopa Rinpoche freely accessible in many ways, including on our website for instant reading, listening or downloading, and as printed and electronic books. Our website offers immediate access to thousands of pages of teachings and hundreds of audio recordings by some of the greatest lamas of our time. Our photo gallery and our ever-popular books are also freely accessible there. You can find out more about becoming a supporter of the Archive and see all we have to offer by visiting the Lama Yeshe Wisdom Archive website.
Available ebook formats: epub mobi pdf rtf lrf pdb txt html
First 20% Sample: epub mobi (Kindle) lrf more Online Reader
pdb
Price: $0.99 USD
Buy Add to Library Give as a Gift
How gifting works
Create Widget
Tags: compassion buddhist philosophy buddhist practice tibetan buddhism lama zopa rinpoche his holiness dalai lama lama yeshe
About Nicholas Ribush

Dr. Nicholas Ribush, MB, BS, is a graduate of Melbourne University Medical School (1964) who first encountered Buddhism at Kopan Monastery, Nepal, in 1972. Since then he has been a student of Lama Yeshe and Lama Zopa Rinpoche and a full time worker for their international organization, the Foundation for the Preservation of the Mahayana Tradition (FPMT).

Nick established FPMT archiving and publishing activities at Kopan in 1973 and with Lama Yeshe founded Wisdom Publications in 1975. He was a monk from 1974 to 1986. Between 1981 and 1996 he served variously as Wisdom’s director, editorial director and director of development. In 1996 he founded the Lama Yeshe Wisdom Archive, which has preserved and organized thousands of hours of teachings and tens of thousands of pages of transcripts, established an image archive of some of the earliest photos of the lamas, and published more than 600,000 books for free distribution.

Over the years Nick has edited and published many teachings by His Holiness the Dalai Lama, Lama Yeshe, Lama Zopa Rinpoche and many other teachers and established and/or directed several other FPMT activities, including the International Mahayana Institute, Tushita Mahayana Meditation Centre, the Enlightened Experience Celebration, Mahayana Publications, Kurukulla Center for Tibetan Buddhist Studies and the Lama Yeshe Wisdom Archive. He was a member of the FPMT board of directors from its inception in 1983 until 2002.

Reviews of Teachings from Tibet: Guidance from Great Lamas by Nicholas Ribush

You have subscribed to alerts for Nicholas Ribush.

You have been added to Nicholas Ribush's favorite list.

You can also sign-up to receive email notifications whenever Nicholas Ribush releases a new book.