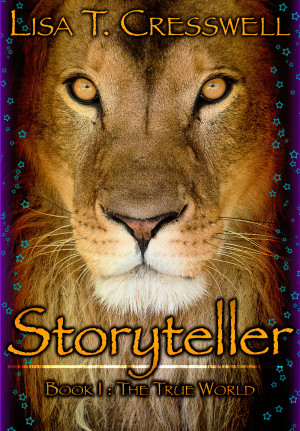 By Lisa Cresswell
Rated 4.00/5 based on 2 reviews
Your best friend is really your guardian.
Your grandmother is really a fairy.
Your birthday present holds a magical power.
And you think your nemesis is just a 13 year old girl.
That was before you encountered The Morrow, a creature from another world sent to stop you from fulfilling your destiny. More
Thirteen year old Lily knows she can make weird things happen, just by telling a story. It’s a gift she can’t always control, making her the queen of seventh grade outcasts. She can’t make a million dollars appear out of thin air or make it rain cupcakes, but it’s not for lack of trying. More than anything, she wants to see her mom, who’s left her in the care of her unconventional grandmother, Gwendolyn, and her only friend, Peter.

When Lily finds a strange fairytale book, she’s drawn into a fantasy world where her mother waits for her. When her grandmother admits to Lily they are fairies, hiding in this world from dark forces in another place, Lily is convinced the book she’s been reading is real. According to the book, those dark forces now threaten to destroy her mother. What Lily doesn’t know is they are already hunting her as well.
Despite the dire warnings of Gwendolyn and Peter, Lily embarks on a mission to find a way into the fantasy world to save her mom. The events she sets into motion with the telling of a story will change all of their lives forever.
Available ebook formats: epub mobi pdf rtf lrf pdb txt html
First 10% Sample: epub mobi (Kindle) lrf more Online Reader
pdb
Price: $2.99 USD
Buy Add to Library Give as a Gift
How gifting works
Create Widget
Tags: romance love friendship halloween adventure action forgiveness fantasy magic elf fairy fairies elves pixies spells middle grade harpy teen fantasy storyteller pixie spellbook spells magic allhallows magical spells
About Lisa Cresswell

Storyteller ~ Book One: The True World
How far would you go?

Reviews of Storyteller by Lisa Cresswell

Storyteller is the first book of the Storyteller series. The hero is Lily Lightfoot, a middleschooler with a not-so-secret ability to tell stories that come true. Rather than getting her ahead and making her well-liked, the disasterous outcomes of some of her stories have made her somewhat of a social outcast, leaving her with only one friend, Peter. The story opens with Lily letting her rivalry with former friend, Heather, get the best of her and retaliating with one of her stories.

Now, this plot would be pretty good if this were a story about Lily trying to get a handle on her ability and perhaps earning the peer friendships that it has cost her, but this story is much more than that. When Lily finds a strange book in an abandoned house, she begins to suspect there's more to her history than her Gran is telling her. Soon, she, Peter and Heather find themselves caught up in a struggle for survival against a shapeshifting monster, an evil king, and his minions.

This story blew me away. As a middle grade story, it's a success with plenty of social strife and a little innocent romance. But what really gets me is the world building, the fantasy and the adventure. Plus, there is an element of danger that soon builds into quite a gripping story, nothing at all what I expected in the early chapters. The writing is smooth and easy to read without being simplistic. The plot development is solid, and I really enjoy the unique way Lily learns about her mother.

The character development is also noteworthy. Each person, friend or foe, is unique and believable. The good guys aren't perfect and the bad guys are scary, but not invincible.

Overall I loved this story because it's exciting and reminds me of The Neverending Story. It's one I know I'll read again and again. I recommend this to young and old, anyone who loves fantasy and modern fairy tales.

I was lucky enough to win all three books in this series in a contest.

A fun middle-grade book. This is the story of a girl’s attempt to find her mother and discover who she truly is. This is always a terrific theme for this age group, but Cresswell takes it one step further and put it into a wonderful world where, in an alternate universe connected to ours, live fairies, elves and all sorts of magical creatures, both wonderful and nasty. Characters are almost always more than they appear to be and relationships are intricate with a twist that makes the whole story interesting.

Although the pacing is a little slow, I kept coming back to read more, wanting to know what happens to the heroine, Lily. The story of her mother, Eleanor, which Lily reads about in a books she finds, is even more compelling than Lily’s own story. Cresswell has a few problems with point of view (giving odd points of view here and there for a paragraph at a time), it wasn’t a big enough problem to jolt me out of the story completely. Less savvy readers may not even notice.

This is definitely a book into which any kid, and many adults, would be happy to disappear.