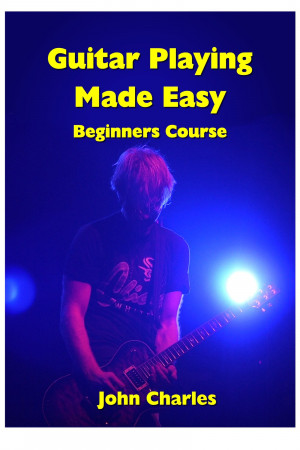 By John Charles
Discover for yourself the pure joy and relaxation you get from playing this beautiful instrument. And make no mistake, if you follow through on all of the lesson in this course then you will be making beautiful music. No previous experience is required for this step-by-step course. More
Here is your chance to discover the absolute joy and sense of fulfilment which you will get from learning to play one of the world's most popular instruments. This is not an academic course, it is primarily a course with one aim - to get you playing and enjoying this instrument as quickly as possible.
This is the very same course that I teach on a weekly basis to my face to face students, the only main difference is that they pay an awful lot more for it!
It takes you step by step from complete beginner to a very acceptable level of playing. And no, you won't be able to play like Eric Clapton overnight, but you will be learning, step by step, how to play and produce very nice songs and melodies which will be the envy of your family and friends.
Being able to play the guitar opens up a whole new world to you, and speaking from personal experience, it is a world which I have never regretted entering.
Come and join me and see for yourself.

I work as both a professional guitarist as well as being a guitar tutor, and I started off
my playing career in a gospel/folk group called the Wayfayers.

Finally I moved into Rock music and for a number of years now have been playing
with a band called MFP and our gigs have literally taken us all the way around the
world including time spent in Nashville, Washington and New York before returning
to a residency in London.

I am a member and fellow of the Guitar Appreciation Club.

When I was learning to play the guitar I used to sit in a field similar to the one in the picture, and practice my chords etc. You don't have to do that in order to learn, but it is good fun.

You have subscribed to alerts for John Charles.

You have been added to John Charles's favorite list.

You can also sign-up to receive email notifications whenever John Charles releases a new book.