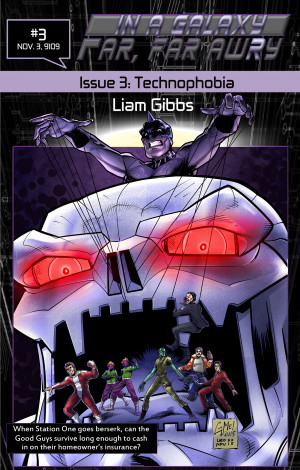 By Liam Gibbs
Book three! Who would have seen that coming? All of you. That's who. This tome of blatant awesomeness raises the bar of humor to ridiculous new levels. Like level 99. Or level 100. Or whatever comes after level 100. There are better uses of your money...but not many. More
No one told Master Asinine that disco is dead.

Master Asinine has a new scheme up his pants: take control of the Good Guys’ space station by usurping its controlling software, the haunt control. His method of attack? The word-jumbling Scapegoat and the buffet-bingeing Multipurpose.

When Scapegoat and Multipurpose install Asinine’s new Haunt-Control Control, it wreaks havoc: public-access lyrics to the tune of disco beats. Oh, and attempted murder. Now Good Guys Ace Spandex and Smithereens must find a way to shut it down.

To boot, the captive Schizophrenic escapes Good Guy lockup. All this while Legion needs to impress investors whose money will ensure that the Good Guys continue operation. Not easy when Schizophrenic takes him hostage.

Liam Gibbs knew he was destined to write at age four, when he authored a breathtaking account of a cow who ate grass. The bovine saga failed to catch the public’s eye but earned the budding author parental acclaim. Since those early times, he’s gone on to write the novella Not So Superpowered and humorous articles for various magazines.

A twenty-year veteran of the brutal world of hand-to-hand comic book fandom, Gibbs cut his teenage teeth on titles such as Spider-Man, X-Men, New Warriors, and other Marvel comics.

Gibbs graduated college with a degree in professional writing, which included classes on fiction writing and story structure. He lives on the balmy shores of Ottawa, Canada, where he relaxes by watching staggeringly awful horror and science fiction movies. A health and fitness nut, he shoots lasers from his eyes, uses the word exclusive incorrectly, and once wrestled an exclusive brontosaurus. True story.

About the Series: In a Galaxy Far, Far AwRy

Imagine if Darth Vader left Super Grover in charge of the Death Star. Yeah. That crazy.

In a Galaxy Far, Far AwRy is the hilariously bonkers novella series that pokes fun at superhero comics, space operas. It mashes both of those into a gigantic wacky ball, takes out the Michael Winslow's cameo (we're as broken up as you are), and spits out a series of stories that will make your face's eyeballs melt out your face's nose holes.

While the series is written in prose form, it draws inspiration from comics like Spider-Man, X-Men, and The Avengers, shows and movies like Seinfeld, Family Guy, Spaceballs, Futurama, and Mystery Science Theater 3000, and miscellany like Tenacious D, Repairman Jack, and Dead Rising.

If you're into any of that stuff, check here often for the best news you've had all day! It's a comic book in prose form but without the baggage of a fifty-year history!

An homage to and spoof of--and not related to--Star Wars in any way.

Also in Series: In a Galaxy Far, Far AwRy

You have subscribed to alerts for Liam Gibbs.

You have been added to Liam Gibbs's favorite list.

You can also sign-up to receive email notifications whenever Liam Gibbs releases a new book.