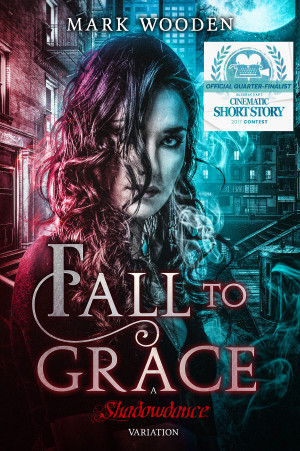 By Mark Wooden
Rated 5.00/5 based on 1 reviews
A tribunal is set to strip a warrior sorcerer of her magical abilities. A vampire assassin races to save the sorcerer as she is the avenue for the assassin's redemption. This story placed as a quarterfinalist in the 2017 ScreenCraft Cinematic Short Story Contest. More
Enter the "Shadowdance" action/ urban fantasy saga with this short story, "Fall to Grace."

Vampire Adriana suffers from memory loss. She remembers a girl, possibly her sister, and a previous life as an assassin. Warrior sorcerer Makeda helps Adriana recover her memories -- but then the women are captured by Makeda's superiors, the Knights of Vyntari. They want Makeda to explain why she jeopardized three important artifacts during an operation in Berlin.

Adriana must help Makeda prove her case to the Knights, or Makeda will be excommunicated from the organization and lose her ability to work with Adriana.

Mark Wooden is a SYFY Wire Fan Creator and a writer of novels, screenplays, and short stories.

Mark is the son of a sharecropper (not really, but he likes “The Jeffersons”) who has actively pursued the dream of being a Creative since his epic kindergarten work, "Ne-Ne the Vampire Panda.”

He draws inspiration from vampire slayers Buffy, Anita Blake and Blade; decades of "Batman" and "X-Men" comic books; and conspiracy epics "24" and "The X-Files." He'd be remiss if he didn't mention the Frank Miller-created assassin named Elektra.

Mark mines his two decades of experiences as a video director of live events (concerts and corporate) to instill humanity into the vampires, demons, and other creatures of his self-published “Shadowdance” urban fantasy saga.

Outside of his self-published works, Mark wrote for EA Games's “Quiz Show.” He also wrote the short film, "Reload: Two in the Chamber" for Focused In Entertainment.

Vampires, demons, werewolves, sorcerers and other creatures of myth and magic secretly combat one another for possession of the nine Vyntari shards.

When recombined into the Vyntari jewel, the shadow god Yahweh will be unleashed.

The person who controls the jewel controls the shadow god. They can remake the world in their image -- or destroy it.

Subtle manipulations erupt into brutal violence, all hidden from the eyes of those Uninitiated to this struggle.

This is the world of the Shadowdance.

This book was such a good read. Ordinary every day people and real life events. I loved how the book was written. 5 stars+.

You have subscribed to alerts for Mark Wooden.

You have been added to Mark Wooden's favorite list.

You can also sign-up to receive email notifications whenever Mark Wooden releases a new book.