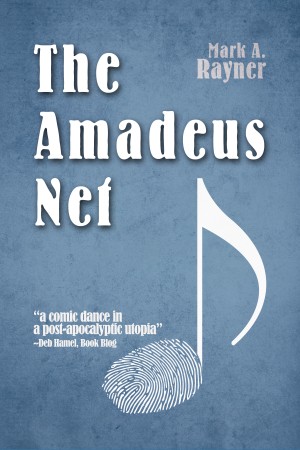 By Mark A. Rayner
Rated 5.00/5 based on 1 review
Wolfgang Amadeus Mozart is alive and in love, living in the world’s first sentient city, Ipolis. Lucky for both of them, nobody knows, but how long can it stay that way?

Set in 2028, The Amadeus Net is a satire that examines life, love and the nature of art in a world struggling to recover from a cataclysmic asteroid strike and human stupidity. More
Wolfgang Amadeus Mozart walks into the sex change clinic, determined to have his “sprouter” snipped off. So begins The Amadeus Net, a satirical novel set in the year 2028, which explores art, love, and identity at the end of the world. For more than two centuries, the one-time wunderkind has kept his existence secret while he tried to understand his immortality. Living in style through funds raised by selling “lost” Mozart works, he has also helped to create Ipolis, a utopian city-state, after the cataclysmic Shudder, a global disaster caused by an asteroid strike in 2015.

But a few complications mar Mozart’s utopia. The woman he loves is a lesbian, which, paradoxically, makes him forget about his sex-change plans. The world’s greatest reporter knows he’s still alive and will stop at nothing to expose him. The stakes are higher than he knows, because if the reporter finds him, so will the spy planning to sell Mozart’s DNA to the highest bidder. Oh, and, by the way, the world might end in seven days. His only allies are a psychotic American artist, a bland Canadian diplomat, and the city itself: a sapient, thinking machine that is screwing up as only a sapient, thinking machine can.
Available ebook formats: epub mobi rtf lrf pdb txt html
First 20% Sample: epub mobi (Kindle) lrf more Online Reader
pdb
Price: $3.99 USD
Buy Add to Library Give as a Gift
How gifting works
Create Widget
Tags: artificial intelligence historical fiction science fiction art satire genetic engineering music jazz immortality creation postapocalyptic nuclear war mozart amadeus classical music globalism wolfgang amadeus mozart the amadeus net rich vs poor
About Mark A. Rayner

Human-shaped, monkey-loving, robot-fighting, pirate-hearted, storytelling junkie, Mark is actually Canadian. By day he is a university prof and by night, a writer of humorous, satirical and fabulist novels, squibs and other drivel. (Some pure, and some quite tainted with meaning.) The Fatness is his newest novel. The Fridgularity (2012) won an IndieReader Discovery Prize for best humor. Pirate Therapy and Other Cures is a collection of short fiction. Marvellous Hairy is his second novel. His first book, The Amadeus Net, is heavier on the robots.

You can read more of his fiction (for free) at his website where you can also dig into his irregular and explosive blog, The Skwib (markarayner.com). Follow him at Twitter (@markarayner) or on Facebook (www.facebook.com/RaynerWriting).

Learn more about Mark A. Rayner

Reviews of The Amadeus Net by Mark A. Rayner

I sensed there was some element of The Odyssey beneath the surface of The Amadeus Net– or maybe The Iliad. I’m not well versed in Homer, but the backgrounds of a few Amadeus characters evoke those classic Greek myths. Regardless of whether I imagined that influence, Amadeus is a fantastic story told very well. The time and labour author Mark Rayner put into creating the characters within these pages is quickly apparent, and their eclectic richness pays off handsomely as the reader becomes deeply concerned with their individual and collective fates.

The story itself concerns Mozart (yes, that Mozart) who, in this fictional world, has a peculiar habit of not dying. As a result, he’s alive and well in the near future, living on an isolated (though thriving) South Pacific island named Ipolis. His identity is, as you would expect, a long kept secret, and he would prefer it remained so. However, some are aware of his gift and view it as a grand opportunity for their own enrichment, and from there the trouble commences.

The story is simultaneously light, deep, silly and poignant. In the hands of a lesser author, an attempt like this could very well become a dispassionate dog’s breakfast. But in Rayner’s deft hands and mind, it leads the reader deep into the city which serves as the setting (and the city itself is actually a character in its own right!), and into the minds, hearts and souls of the characters. It seems a great many novels I read aren’t able to focus on creating more than a couple of full, rich characters surrounded by cardboard plot devices. Not so with Amadeus, and there within, I believe, lies the book’s greatest strength.

These well-constructed characters each become integral to the story’s grand climax, all the while faced with the somber specter of global destruction. Personally, I found myself concerned with the fates of his characters more than the actual planet, and for that I blame Rayner for making me care about them so deeply.

As mentioned, the city itself is in the mix as one of the main characters, observing and occasionally manipulating events, using subtle and not-so-subtle methods to help create a harmonious outcome. Ipolis provides a big-picture perspective that the human characters cannot. It comes across like a Shakespearian muse or benevolent god, though not a fully omnipotent one that could assure its own wishes will come to fruition. It’s very nearly mortal in this regard, thus allowing the reader to sympathize with its plight and feel concern for its frustrations and even its “being.”

If a parallel can be drawn with another Rayner book I have read (and reviewed), Marvellous Hairy, I think it would be that beneath the hectic, comedic surface is a solemn message about man’s inhumanity to man and the horrific results that can occur when callous (or zealously misguided) beings are left to run rampant and hold the rest of mankind at their twisted mercy.

But Amadeus is a thoroughly different book than Hairy (though no less compelling) and this illustrates Rayner’s ability to create completely different yet believable worlds from one novel to the next. Some may take comfort in continuity of tone in an author’s collective works; I tend to admire an author more when he can show me radically different places, persons, and depths. That’s not to say Rayner’s style doesn’t remain consistent; it certainly does.

I thoroughly enjoyed this book and highly recommend it to anyone seeking a fresh and talented author who unabashedly departs from traditional storytelling for more experimental prose, much to the delight and satisfaction of his audience. Congratulations, Mr. Rayner; besides creating another very enjoyable novel, you’ve created a genuine fan in me.

(reviewed 2 days after purchase)
Scott Fabirkiewicz reviewed on July 23, 2011
(no rating)
This book is the debut novel of Mark A. Rayner, but was the second of his work that I've read.

One thing that I thought would get in the way of reading this book was the famed movie, "Amadeus", because of Tom Hulce's performance. But Rayner gave Mozart a new voice. It was a smooth transition and a very enjoyable character. He's confused and hurting from the years of living, and not living, and it made for probably one of the most interesting historical characters in fiction.

This book, in my mind, is different from the author's first novel ("Marvellous Hairy"). Though still satire, I found it had a more serious tone about it. The characters didn't make me laugh out loud, but were not less interesting. They made me cringe at times, which is good. They were driven by different issues. There was a nature of the book that had a very mature, experienced writing about it. Sometimes it's tough for me to read a book by an author, and then go back and read a book written earlier in their career. You can see the difference in the writing and at times seems like a step back. Other then one item, I didn't get that feeling with this book. You can see an experienced writer behind it, even if a debut.

That item was how the reader was let into the minds of it's characters. Every few chapters we would get one that was in first person, changing between the different characters. It was a great idea to expand the depth of the characters, but it was done almost like they were asked to talk about themselves without an explanation why. The story, and writing, though carried it so that it didn't seem awkward. It made me scratch my head at first, but the delivery added much to the story.

Now having read Mr. Rayner's first two novels, and enjoying both, he has become a must read for me. I look forward to his next.

(reviewed the day of purchase)
Dar Mil reviewed on July 22, 2011
(no rating)
This is the review I wrote for GoodReads:
What if Mozart wasn't in that mass paupers' grave? What if he had managed to live not only to the current age but centuries beyond, even after the world had been hit by a huge meteor. That is the main plot. But there are many subplots. A sentient city, Amadeus and the sex-change, Amadeus and the lesbian nurse, wars and rumors of all kinds. The story was very good. But I think the copy I got for my Kindle wasn't cleaned up enough. For one the author repeats himself, then the Title or Author's name was there to interrupt the flow. (I read and listened to text to speech). Hopefully future editions will be much better.
***
I wrote that a little over a month ago. I still remember Amadeus Net with fondness. I may have to read it again someday. I don't often feel like re-reading a book but there were so many subplots to keep the story moving that I still find myself intrigued.

You have subscribed to alerts for Mark A. Rayner.

You have been added to Mark A. Rayner's favorite list.

You can also sign-up to receive email notifications whenever Mark A. Rayner releases a new book.