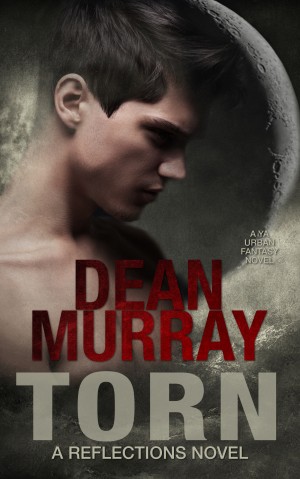 Torn: A YA Urban Fantasy Novel (Volume 2 of the Reflections Books)

By Dean Murray
Rated 4.50/5 based on 6 reviews
Shape shifter Alec Graves has spent nearly a decade trying to keep his family from being drawn into open warfare with a larger pack. The new girl at school shouldn't matter, but the more he gets to know her, the more mysterious she becomes. Worse, she seems to know things she shouldn't about his shadowy world.

Is she an unfortunate victim or bait designed to draw him into a fatal misstep? More
The war between Alec Graves' pack and the other shape shifters in town can't last much longer.

He can't win and he can't run away.

The new girl at school shouldn't matter, but the more he gets to know Adri, the more mysterious she becomes.

Is Adri an unfortunate victim or bait designed to draw Alec into a fatal misstep?

If Alec guesses wrong he'll be pulled into a fight that will cost him everything.

Publisher's Note: Torn is a YA Urban Fantasy novel, and is one possible entry point into the books that make up the Reflections Universe. The Reflections Universe is a series of clean YA Paranormal books featuring vampires, shapeshifters, werewolves and more, which have been written so they can be safely enjoyed by both young adults and older readers alike. Torn is followed by Splintered, and is one of several YA shapeshifter books available from Dean.

The Reflections Universe: Some stories are too full of teen urban fantasy goodness to fit into just one series!

Dean started reading seriously in the second grade due to a competition and has spent most of the subsequent three decades lost in other people's worlds. After reading several local libraries more or less dry of sci-fi and fantasy, he started spending more time wandering around worlds of his own creation to avoid the boredom of the 'real' world.

Things worsened, or improved depending on your point of view, when he first started experimenting with writing while finishing up his accounting degree. These days Dean has a wonderful wife and daughter to keep him rather more grounded, but the idea of bringing others along with him as he meets interesting new people in universes nobody else has ever seen tends to drag him back to his computer on a fairly regular basis.

Reviews of Torn: A YA Urban Fantasy Novel (Volume 2 of the Reflections Books) by Dean Murray

Finally, a complete book which tells the story from the other perspective. You find out in this book why Alec reacted in certain situations the way he did. You also find out more about the lives of Alec and his shapeshifter family, the Coun'hij, how his mum became the way she is and more importantly the fight between Alec and Brandon from Alec's point of view. You know, I've read this scene twice now from two different points of view and it still takes my breath away!

This is the twin to Broken and as such I would say is more of a 'guy' book. There is lots of violence as the packs fight, there is in-fighting within the packs as some members jostle for ranking. However, as a 'girl' I read this book and thoroughly enjoyed every moment of it.

After reading Broken and Torn, I would definitely recommend to any YA, shapeshifter, Twilight fan. I can see this series just getting better and better.

Amazing book! Since I started with Broken, it was easy to put most of the pieces together when reading Torn. The deep love Alec has for Adri is so romantic and the things he does are so sweet, it makes the book so interesting for those who like a bit of romance. I like the way action and romance is mixed and couldn't stop reading it. Can't wait to download splintered and the other books.

Good YA,liked the high school students who were shifters.Parts of it were just a little too predictable but it was a fun read.

I started with Broken first but when I realized Torn was first I read both at the same time. It was completely capivating. I couldnt put it down.

Torn is a YA paranormal romance filled with shape-shifters and power struggles. Murray creates a tale that is both fascinating and unique. This novel kept me engaged and I finished it in one evening.

The tale focuses on Alec Graves. He is the alpha of his wolf pack and seventeen years old. They live in Sanctuary; a small town surrounded by woods. Alec is having trouble with another Alpha named Brandon. Brandon’s pack has been pushing deeper into Alex’s territory trying to claim dominance. Murray gives just enough back-plot to let us know there has been a rift, and that it was caused by Alex's deceased father. There is tension within Alex's pack and he is working to resolve it. Both packs are wealthy and Alec seems to control the small town, but Brandon is seeking to change that. As if Alec doesn’t have enough on his plate already in walks Adriana Paige. Something about Adriana is different; she glows but doesn’t appear to be a shape-shifter. Alec is leery of her at first, but she begins appearing in his dreams and ultimately she becomes very important to him. This would be lovely, but she had also attracted the attention of Brandon and she appears to be dating him.


The tale that unfolds is fast paced, with battle scenes as the shifters defend their territory. Murray’s descriptions of the shape-shifter transformation and battle strategies are fascinating. There are some key characters whose stories I wanted to learn more about. The romance between Adriana and Alex is sweet and develops at a natural pace. I really liked Alex. He has what seems like the weight of the world on his shoulders. In a lot of ways he is a typical teen, but he is also loyal, honorable and attempts to be a good leader. The ending offers an epic battle scene that had me quickly turning the pages.

Overall, I liked this character driven novel and recommend it to fans of shape-shifters and paranormal romance. I am hoping that Murray writes a second novel, so that we can learn more about the world and characters he has created. This novel was told from the POV of Alec and you can read it from Adriana’s point of view in the novel Broken. I look forward to reading more work by this author.

I want to thank the author for providing this ARC in exchange for my unbiased review.

You have subscribed to Smashwords Alerts new release notifications for Dean Murray.

You have been added to Dean Murray's favorite list.

You can also sign-up to receive email notifications whenever Dean Murray releases a new book.