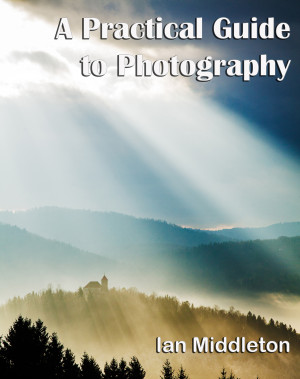 A Practical Guide to Photography

By Ian Middleton
Take your camera off auto and learn how to take control and get better photos than you ever did before. In this free downloadable ebook, I have put together all the basics in a simple, practical and jargon-free way. Illustrations and examples photographs show you exactly how each effect works, so it's just like being out there on a workshop doing it yourself. More
Download for free now -
Everything you wanted to know about photography but were afraid to ask
Learn how to take your camera off auto and take control.
In this free downloadable ebook, I have put together everything I have learned about the fundamental basics of photography.
When I started learning photography back in 1997, I picked up an old book which taught me everything I needed to know in order to fully understand how a camera and photography works. While we have moved on to digital and cameras have become more complex and, in some ways, easier to use, these basics are just as important today as they ever were.
Laid out in a simple, visual and easy to read format that is devoid of technical jargon, the book helps you understand all the essentials such as: light, exposure, shutter speed, aperture, ISO, white balance, focussing and exposure compensation.
Using illustrations and example photographs, you can more easily see how all these work and how each effect is applied.
A simple, practical way to learn all the skills you need to take great photos like the pros
Download: epub mobi (Kindle) pdf more Online Reader
lrf pdb txt
Price: Free! USD
Add to Library
Create Widget
Tags: camera photography digital learn photoshop slr digital photography learn photography learn a skill slr camera
About Ian Middleton

I am a travel writer and photographer, among other things. I also teach photography and English, and run workshops and courses in both England and Slovenia.

Over the past years I have travelled through Australia, Mexico, North America, Spain, Ireland, South America, Cuba, New Zealand and Slovenia. In 1997 I started working on a series of travel books charting my adventures in these countries. They tell of my experiences and of the colourful characters I met along the way. The reason I started writing these books was to show people just how much fun and adventurous travelling can be, and how it is not as dangerous as many might perceive. I also wanted to show that travelling alone need not be as lonely as you might think. These books are a perfect example of that. Besides, I have a terrible memory, and so at least this way when I’m old and grey, sitting in my rocking chair with my pipe, slippers and incontinence pants, I’ll be able to read my books and think, blimey did I do that?

To the End of the World and Back was the first of these books to be published.

In the summer of 2003 I hiked solo for 280 miles across Ireland, from Wexford to Donegal, in aid asthma research. Visit the walk for asthma link for more info and an article I wrote about it.

In keeping with the emerging interest in ebooks, My third title is an e-book story of my second ever long solo journey. It tells of how, as a novice traveller, I set off on an amazingly profound and comical four-month journey around the whole of Mexico. My two paperbacks, To the End of the World and Back and Hot Footing Around the Emerald Isle have also been released as e-books complete with over a hundred full colour photographs from each journey, and Hot Footing now also contains 18 new articles from return journeys to the Emerald Isle.

I have also collaborated with Douglas Elwell on a book called Mysterious World: Ireland, a lavishly illustrated history book/travel guide focusing on the history and ancient mysteries of Ireland. Learn about the fairies, giants, leprechauns, ancient kings and the many Celtic deities that have all left their indelible mark upon Ireland’s culture and traditions. Find out where many of the country’s ancient megalithic structures, fairy trees, raths and other sacred places lie, and read what the archeologists and tour guides won’t tell you, the legends and folklore behind them. For example, if you take the tour of Newgrange, the guide will not tell you that according to Celtic mythology this, the greatest of all the burial mounds of Ireland, was once the fairy palace of the Dagda, the father god of the Tuatha de Danann, a magical race who once inhabited Ireland and were defeated by the Celts and driven from the land into the underworld to become known as the Sidhe (fairy folk) of Ireland.

You have subscribed to alerts for Ian Middleton.

You have been added to Ian Middleton's favorite list.

You can also sign-up to receive email notifications whenever Ian Middleton releases a new book.