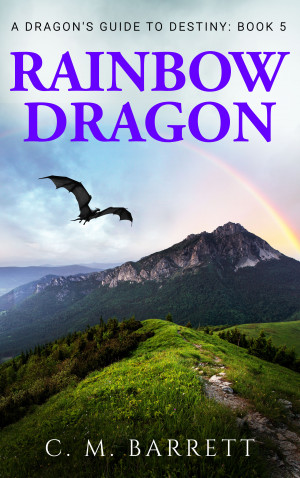 By C. M. Barrett
The mate of Water dragon Druid has laid the egg of their first child. Some Earth dragons fear that this child will be the Rainbow Dragon, whose birth may signal the end of the world, and steal the egg.

Druid’s friends try to devise a plan to disarm the rebels without destruction of the egg or loss of life, but, for the sake of his child, Druid is prepared to die. More
After strained negotiations that include an earthquake or two, the heroes and heroines of Oasis prepare to welcome fairies, dwarves, and other elementals to their land. Though the elementals promise to improve crops, irrigation, and general wellbeing, the Oasans worry about the problems of introducing alien beings to humans who are unfamiliar with their existence.

A rebel faction of fairies and dwarves want more than integration. They call for the annihilation of the human race. They’ve joined with rebellious Earth dragons who fear that the child of Druid, the water dragon, and his mate will be the Rainbow Dragon. Some believe that the Rainbow Dragon will bring peace, but the rebels fear that its birth will signal the end of the world. They steal the egg.

All species of dragons and their cat and human allies unite to devise a plan for disarming the rebels that doesn’t risk the destruction of the egg. They hope to do so without loss of life, but, for the sake of his child, Druid is prepared to die.
Available ebook formats: epub mobi pdf lrf pdb txt html
First 20% Sample: epub mobi (Kindle) lrf more Online Reader
pdb
Price: $2.99 USD
Buy Add to Library Give as a Gift
How gifting works
Create Widget
Tags: inspirational cats ecology dragon rainbow visionary kittens ecofiction baby dragon
About C. M. Barrett