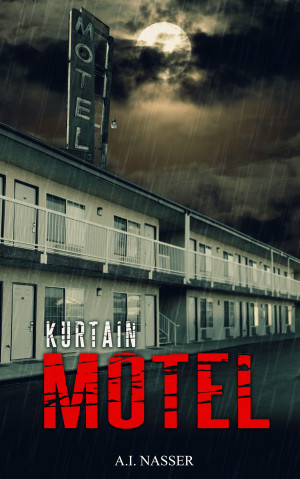 By A. I. Nasser
Rated 3.00/5 based on 1 reviews
Patrick Lahm is down on his luck. After being stranded in a storm, he hitches a ride to Kurtain Motel, where he is forced to spend the night. But as the night slowly drags on, Patrick and the other guests slowly begin to realize there is more than meets the eye to their temporary lodging. Something very evil lurks deep within. Past sins are relived in this motel, where all nightmares come true. More
“Confess!”

Patrick Lahm is down on his luck. Late for his book signing, out of gas and stuck in a storm. He hitches a ride to the Kurtain Motel where he is forced to spend the night. The small motel seems harmless enough at first, but as the night drags on, Patrick and the other guests slowly begin to realize there is a lot more to their temporary lodging than meets the eye.

Something evil is at work at the Kurtain Motel; something that creeps into the deepest, darkest corners of your mind and tugs at the chords of sanity until they finally break. On the longest night of his life, Patrick soon finds out that there is a reason why skeletons are kept in closets. He realizes that your sins always find a way to catch up with you, no matter how hard you try to run.

At the age of four, Ahmed I. Nasser’s parents decided that the best way to keep a hyperactive child occupied was to teach him how to read and constantly bombard him with books. Since then, the world of imagination has constantly consumed him. He quickly decided that the only way to feel fulfilled was to spend his time writing one story after the other, even opting out of a career as a pediatrician, despite ten years of struggling through med-school.

Influenced by Stephen King, Neil Gaiman and Terry Pratchett, he has been writing since the age of 12 while travelling the world with his family. Now, finally settled in Egypt, he divides his time between teaching Middle School English Literature and finding the best ways to scare his family and friends.

Learn more about A. I. Nasser

Good story, reminds me a little of the movie identity. l enjoyed the writing style. Made for a quick and easy read. My only complaint is that on Smashwords, Amazon etc. It doesn't indicate that it is book one of a trilogy.

You have subscribed to alerts for A. I. Nasser.

You have been added to A. I. Nasser's favorite list.

You can also sign-up to receive email notifications whenever A. I. Nasser releases a new book.