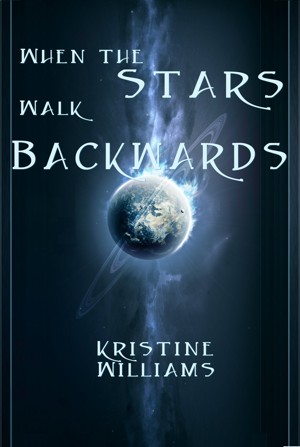 When The Stars Walk Backwards

By Kristine Williams
Rated 4.45/5 based on 11 reviews
Military pilot Mac Brennan wanted a quiet, peaceful retirement, so he joined a deep space colony, forgotten for 20 years. They promised him lavender grass, clear blue skies, and untold miles of wild, untouched nature. What he found were the destroyed ruins of the original colony, an outdated AI full of riddles, and a young man with no memory of what happened, and an unspeakable fear of night.

Born and raised in the Pacific Northwest, I'm an avid reader, writer, and government employee with a degree in Veterinary science (go figure). I write Science Fiction but occasionally dabble in Fantasy, and have been known to explore Mainstream now and again.

Somewhere between the interminable dialogue and all the baths and showers is a pretty good story... but wadding through 250k words to get the 100k that were enjoyable was a bit of a chore.

I enjoyed this story. Well done! I loved the mystery (kept me guessing until the end) and the adventure of it. This is the first book I've read by this author and I will be reading any others I can get my hands on!

Can be very well recommended. The author developed the 2 main characters very well and keeps the attention curve up quite well. A good read :) The story is about a missing colony with one survivor who lost his memory and leaves in fear of the night. Due to the arrival of new colonist and the building of a friendship he starts to remember what happened to the colony.

this was a great read. I was really happy the author took us back to the planet from the keeper series. I was curious about the initial colonisation. Now I need to know when bakersfield found them and why they all dissappeared please :)

Very good read. The book is well written and keeps you interested in the slowly-unfolding mystery of the sole survivor's lost memories. I'm looking forward to reading "Ether" by the same author.

(reviewed 4 months after purchase)
Robert M. Yelverton reviewed on May 12, 2011

I enjoyed reading this book. Will check out more of this authurs writings.

A dollar? A dollar! My goodness it was more than worth it. I highly recommend it. This was my second book by this author and I'm excited to see there are more to be had. Headed to FB next to share a link.

I was hesitant at first to get this book but I absolutely enjoyed reading it! I am hoping the author decides to write a sequel to it. I eagerly await more selections from this author.

This is good entertainment for the low price. Give it a try. The story begins with Mac Brennan and a group of scientists preparing to join a colony on a far planet after the 20-year war ends.
They find only Bryce alive on the planet, with a computer as his protector. Or is the computer trying to kill him? The unexpected tale starts to unfold. Aliens who communicate using colors. Monstrous bird/animals attacking in the night and killing anyone they find, and the hero who is always taking showers. I was not able to figure out how the book title connects to the story, but maybe that's part of the mystery.

You have subscribed to alerts for Kristine Williams.

You have been added to Kristine Williams's favorite list.

You can also sign-up to receive email notifications whenever Kristine Williams releases a new book.