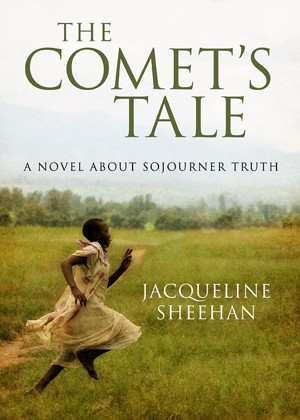 The Comet's Tale: A Novel About Sojourner Truth

“I rode to earth on the backside of a comet.” So begins the story, based largely on the early life of Sojourner Truth. Born at the turn of the nineteenth century to slaves of a New York State Dutch farmer, given the name Isabella, the young child is sold off at the age of nine to a succession of owners---some cruel, some indifferent, all assuming that she, as a colored girl, is nothing more than property. But Isabella has dreams and fears and deeply felt faith that somehow see her through the indignities and beatings she must tolerate. Ultimately she triumphs against the most enormous of odds to speak out against slavery and for women’s rights as long as she draws breath.

A Comet’s Tale is a testament on one woman’s strength and a powerful lesson in courage.

PRAISE FOR A COMET’S TALE:

“…an emotionally and lyrically powerful novelization of the life of Sojourner Truth…offering a new way of looking at one of history’s greatest champions of freedom.”
-Publisher’s Weekly

Jacqueline Sheehan, Ph.D., is a fiction writer and essayist. She is also a practicing psychologist. She is a New Englander through and through, but spent twenty years living in the western states of Oregon, California, and New Mexico doing a variety of things, including house painting, freelance photography, newspaper writing, clerking in a health food store, and directing a traveling troupe of high school puppeteers.

Her first novel, Truth, was published in 2003 by Free Press of Simon and Schuster. Her second novel, Lost & Found, was published 2007 by Avon, Harper Collins. Lost & Found has been on the New York Times Bestseller List and has been optioned for film by Katherine Heigl, star of Grey’s Anatomy. Her third novel, Now & Then, was published in July 2009 by Avon, Harper Collins. She has published travel articles (Winter in Soviet Georgia), short stories (most recently in the Berkshire Review), and numerous essays and radio pieces. In 2005, she was the editor of the anthology Women Writing in Prison. This anthology is the culmination of eight years of writing workshops sponsored by Voices from Inside, an advocacy group for incarcerated women.

Jacqueline teaches workshops at Grub Street in Boston and Writers in Progress in Florence, Massachusetts.

Reviews of The Comet's Tale: A Novel About Sojourner Truth by Jacqueline Sheehan

You have subscribed to alerts for Jacqueline Sheehan.

You have been added to Jacqueline Sheehan's favorite list.

You can also sign-up to receive email notifications whenever Jacqueline Sheehan releases a new book.