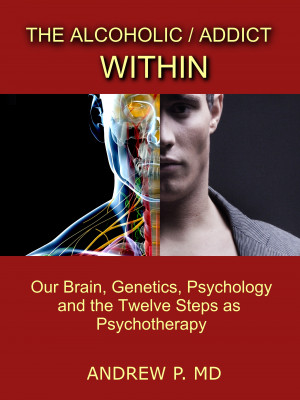 The Alcoholic / Addict Within: Our Brain, Genetics, Psychology and the Twelve Steps as Psychotherapy

By Dr. Andrew P.
Addiction and alcoholism defy all logic. They say only an alcoholic or addict can understand. However, this book helps all people understand why this disease happens and why it is so hard to get free from it. Addicts/alcoholics, their loved ones, and anyone who is exposed to people with addictions will gain a deeper understanding of the why and how of this disease, and of breaking free from it. More
This book explores the science behind why we become addicted to drugs or alcohol, and why it is so hard to stop. It is a guided tour through the biological and psychological make-up of alcoholism and other forms of addiction. It leads the reader through the brain biology, the genetics, and the psychology of this disease, and of recovery from it. The author has a medical education (MD degree and graduate studies) and is currently involved in addictions research. The author is also an addict and alcoholic in recovery, giving a unique perspective. The information is presented in a way that makes it accessible for everyone, and enjoyable to read. The main audience for this book is the alcoholic or addict and those who love them and wish to help and understand them. However, this book will also prove interesting and helpful to those who work in a field where they may be exposed to addictions: teachers, medical professionals, addictions workers, counsellors and therapists, clergy, and those who sponsor people in recovery. The book also explores how to use the science to strengthen recovery from this disease, and uses the 12 Steps as a framework for applying the science to recovery. The 12 Step program was chosen because it is highly consistent with all aspects of the science of addictions. Also explored is the intimate ties between addictions and mental illness. The book takes a positive and upbeat approach to recovery from alcoholism and addiction, and a fun approach to presenting the information.

Andrew spent young adulthood combining his love of mathematics with his love of big explosions by serving12 years in the army as an artillery officer. Academically curious, he left the military to try his hand at "higher education." He ended up with a degree of chemistry and then packed off to get his butt kicked in medical school.
Andrew practiced for 15 years as an Emergency (ER) Physician and general practitioner, all the time with a special interest in psychotherapy and counselling. During the same time, he held faculty positions at two major university medical schools. The same combination of genetics and life situation that affects 13% of Americans struck, and Andrew found himself addicted to alcohol and opiates. Fortunately, he was able to find a way to recovery, and remains happy, healthy, and free from drugs and alcohol to this day.
Upon recovering from his addiction issues, Andrew decided that a respite from clinical medical practice was in order, and during that time he became involved in addictions research and writing. That proved a fulfilling pursuit, so he remains so engaged to this day.
Andrew is a farm kid and country boy who never got over it. An uncomplicated and unpretentious person, he has never fit the mould that his profession usually casts. True to form, his passion has become making the beauty and elegance of science available to all audiences and people of all backgrounds. He writes and lectures to the general public to that end.

You have subscribed to alerts for Dr. Andrew P..

You have been added to Dr. Andrew P.'s favorite list.

You can also sign-up to receive email notifications whenever Dr. Andrew P. releases a new book.