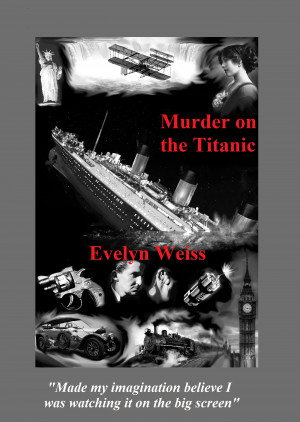 Murder on the Titanic

I live twice.
Once, here in 2017, where I've written a novel about a very modern girl. Who happens to work in the oldest profession. A girl who has to find a killer - before she's imprisoned for murder.
But I also live over 100 years ago. I inhabit the Golden Age of 1912-1914. The age of the Titanic. An age of elegance - and scandal.
Secrets and spies, hidden violence and terror. The last glorious sunset glow before World War One - when, as Sir Edward Grey put it "The lamps are going out all over Europe. We shall not see them lit again, in our lifetime."
Follow me into the darkness.

A thoroughly great read if you love a good murder mystery with lots of twists. It will keep you reading to the end trying to figure out who the murderer is and why.

The story begins with a murder on the Titanic (hence the title) but the events and action occur in England, America and during a second crossing of the Atlantic on another ship of the White Star line.

Some of the characters are there from the beginning, with a couple of others being added as the mystery unfolds and there are plenty of shady individuals that add to the story along with little side plots that send you down blind alleys while trying to figure out the main villain in the story.

The book is well written with the characters being introduced with enough information that allows you to understand them feel as if you're could be their friends and told from the perspective of Agnes Frocester who is hip deep within the adventure and sometimes, a little out of her depth as she, Professor Axelson and Sir Chisholm Strathfarrar endeavour to discover how the murder was committed and who the culprit behind it all is.

This book will keep you guessing until the end

I can count on the fingers of one hand novels I've read that have real flesh-and-blood characters, a plot full of surprises and lots of five-star action sequences. This has all of them. It's got 'blockbuster' written all over it. Amazing.

Loved it. A rip-roaring rollercoaster of action and mystery!

What great characters! - in an action-filled plot that is tense with mystery. Each fast-moving scene is vividly depicted. The dialogue makes the pre-World War I era come alive with suspense and tension.

(review of free book)
Barbara A. Webber reviewed on Sep. 19, 2017
(no rating)
I have read both free offerings on Smashwords, and thank you for allowing free access to such excellent reading material. I don't often review books, but \always try to do so when I find engrossing literature. I enjoy mysteries, but too many I find to be solvable far to soon, Your books keep me up nights, for real reading enjoyment. Seldom does the English language meet such a gifted wordsmith, with an equally fascinating imagination fueled by excellent research.

Despite the complex plot, its an easy read. The speed of the story is not slowed down by the touches of well-researched period detail.

You have subscribed to alerts for Evelyn Weiss.

You have been added to Evelyn Weiss's favorite list.

You can also sign-up to receive email notifications whenever Evelyn Weiss releases a new book.