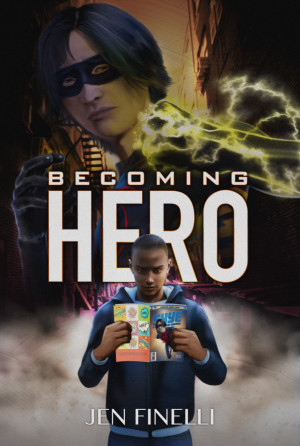 By Jen Finelli
Skye is the storm-tossed comic character out for revenge on the author who murdered his family.

Jace is the math-loving #blerd trying to escape his father’s deadly legacy.

When their worlds collide, Jace must choose between the real world he’s always hated, and the comic book world he’s always loved–and Skye must decide if killing his author will save his world, or damn his soul More
Skye’s a comic book superhero with a gun in his hand and a gripe against his author. Every girl Skye’s ever dated is either dead or trying to take over the world, and in the series finale, Skye’s best friend kills him.   Or so he thinks. The weapon meant to disintegrate Skye lands him in his author’s universe. With a shot at revenge.

Jen Finelli is a world-traveling award-nominated scifi author who&#39;s ridden a motorcycle in a monsoon, escaped being locked in a German nunnery by the sea, discovered beautiful murals and poetry in underground urban caves, explored jungles and coral deserts, and hung out with everyone from dead babies and prostitutes to secretive Senators. She longs for stories that speak truth about the human condition and shine lights on people often hidden in the shadows of modern fiction. She’s a practicing MD, but when she grows up, she’ll be a superhero. Hit her up before the conference on Twitter @petr3pan, and maybe she&#39;ll bring you some free stuff! If you want cancer-fighting zombie fiction, dinosaur picture books, scientists jumping into volcanoes, or talking cars and peyote, you might like Jen's stuff.

Preview it at: byjenfinelli.com
Check out her upcoming movie: mysweetaffair.com

You have subscribed to alerts for Jen Finelli.

You have been added to Jen Finelli's favorite list.

You can also sign-up to receive email notifications whenever Jen Finelli releases a new book.