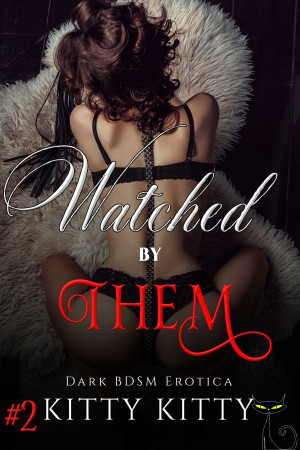 Watched by Them is the second part of the Them series.

When you pet me I’ll purr,
When you feed me, I’ll rub against your leg,
When you use me ... I’ll love you forever.

Sign up for my newsletter to get all my sexy stories delivered straight into your inbox. You'll also receive three of my ultra taboo stories for FREE!

About the Series: Them

Laura meets a man online. She wants to become a submissive and, from what he says to her in their chat sessions, he seems like the perfect Dom. She decides to meet him and it isn't until she can't keep her eyes open that she realizes she's been drugged. She wakes up to find herself tied down to a table with her legs spread and her mouth pried open. She's used by a large group of men for hours and doesn't realize until she's being taken away in a car that she now belongs to them.

This dark, BDSM-themed short story is the first part of an ongoing series.

Also in Series: Them

You have subscribed to Smashwords Alerts new release notifications for Kitty Kitty.

You have been added to Kitty Kitty's favorite list.

You can also sign-up to receive email notifications whenever Kitty Kitty releases a new book.