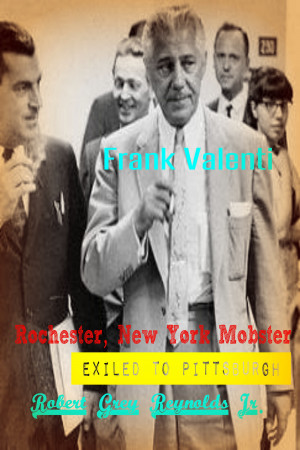 By Robert Grey Reynolds, Jr
Frank Valenti was an underworld figure whose prominence spanned several decades. From the 1950s until 1972 his influence was apparent in Rochester gangland circles. In fact, even though it was never made official, the Valenti family operated as an independent entity, separate from their Magaddino superiors. Valenti carried out Mafia orders relating to gambling, harness racing, real estate, etc. More
Frank Valenti was a Mafia figure who controlled Rochester, New York underworld activities from 1964-1972. He was an integral part of the Stefano Magaddino criminal syndicate, based in Buffalo. Costenze "Stanley" Valenti, Frank's brother, was his partner in crime. Costenze was sentenced to prison in New York City for a time. Frank Valenti was placed under court ordered exile until 1964, when he returned to Rochester from Pittsburgh to face tax evasion charges. Valenti met with higher echelon Magaddino empire figures in 1965. The Niagara Falls conclave dealt with gambling, i.e. specific cuts received by the mob in return for protection for bookies.