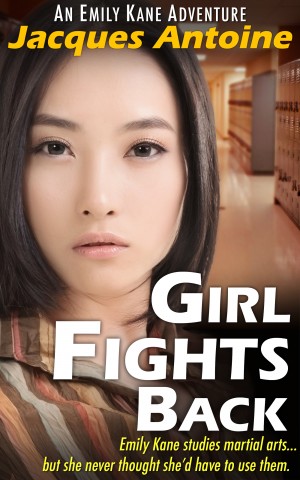 Books 2 - 5 in the Emily Kane Adventures are available now:
Girl Punches Out - a kidnapping, and the trail leads to Kamchatka
Girl Takes Up Her Sword - when the swords come out, things get nasty, and there may not be a way to stop the violence
Girl Spins A Blade - a trip to Nepal to find inner peace, but trouble follows
Girl Takes The Oath - Emily finds a calling in the Navy, trailing danger in her wake.
Girl Rides The Wind - Emily's Marine unit tracks terrorists in the Celebes Sea, and something much more menacing finds her.

By day, Jacques Antoine is a professor at a small college in the southwest, by night he writes action-adventure stories. At first, he wrote "kung fu" tales just for his daughter, when she was a little ninja studying karate. As she grew up, the tales evolved into full-length novels focusing on the dilemmas of young adults, but always set against the background of martial arts adventures. When he's not writing or teaching, he enjoys walking his dogs in the Sangre de Cristo Mountains outside Santa Fe.

The Emily Kane Stories are based on the central insight of Japanese martial arts, captured in the little word "sen." It means, roughly, initiative. It can take many forms, and is visible in all walks of life. In Karate, "go no sen" means "counter-attack." But in other contexts it might also refer to resilience, or responsiveness, or a deliberate choice. The common element lies in the insight that responsiveness or deliberation is not the same as passivity, and neither is aggression necessarily a sign of initiative. True initiative lies deeper than the difference between activity and passivity.

I bought this book mostly out of curiosity to see how someone might handle martial arts themes in a young adult novel. It turned out to be an impressive beginning to what is apparently to be a series. Although written to be age appropriate—and generally following the viewpoint of its teenaged heroine—the book could almost pass for a contemporary adult thriller. As a result, you never feel that the author is writing down to his audience. This was evident in other ways as well: I especially appreciated the way the author was able to introduce pretty sophisticated reflections on philosophical aspects of the martial arts into the story in an unobtrusive way. Combine that with his professional prose and plotting (and his real skill with action scenes), and you have a book that will both entertain and challenge a young reader.

You have subscribed to alerts for Jacques Antoine.

You have been added to Jacques Antoine's favorite list.

You can also sign-up to receive email notifications whenever Jacques Antoine releases a new book.