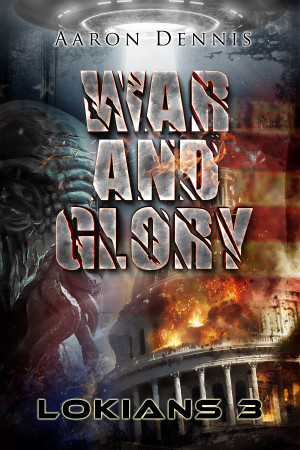 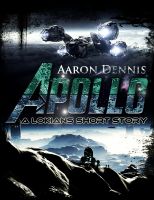 I loved Lokians 3. It begins with Riley in court being tried for crimes like desertion and a bunch of stuff that hasn't happened yet because it sets up the story. Then Riley with his old crew and the agents from the bureau get together to try to stop the grays from taking over the earth. They have to help ships evacuate people to Mars.

In the meantime they are also waiting for reinforcement from the other colonies and for the Thewls to help ouut. It seems like the grays are working together with the Lokians because the Reptilians are trying to make the grays evolve by splicing their dna with humans, and then there's all the stuff that happened when Riley killed the Lokians queen in subspace so there's an after effect like some kind of break in reality.

There's a lot of action. I think more than in They Lurk Among us but maybe less than in the first book, Beyond the end of the World. Its really great scifi and i think there will be at least one more book in the series.

Finally had a chance to sit down and read War and Glory, Lokians 3 by Aaron Dennis. What is there to say? Lots of aliens, cool futuristic tech, the space ships were awesome, everything progressed as it did in the previous two novels, and I totally loved it.

It starts off with Riley O’Hara apparently back with the Earth Navy, only he’s being court martialed for desertion, which–spoiler alert–happened at the end of Beyond the End of the World. The judge prattles on all about all the things that have led to the court martial including the series of events, which are then described in the book. So, like, the prologue glosses over the first two books, Beyond the End of the World, and They Lurk Among Us, and then the first chapter glosses over what will happen in War and Glory. I thought that was a cool idea.

The second chapter picks up right where They Lurk Among Us left off–spoiler alert–the Grays have stationed over Earth in order to retrieve NOAHH, the alien-robot hybrid thing. In the meantime, Earth is trying to evacuate civilians to Mars, which the aliens aren’t interested in taking over, though they do blow evac ships out of the sky. Since The Bureau is trying to coordinate with Earth, other human colonies, and the Thewls, they send Riley, Sasha, Ivan, Franklin, and Adams, to meet with General Matheson, recover some mysterious piece of alien technology, which I’m sad to say is never explained, but I’m guessing will be reintroduced in the next novel…? Right? There is going to be a next one, right?

Any-meow, it turns out that the Grays are more than just drones, they’re becoming self aware, are hybridizing with humans to evolve into a new race, are linked to another race of aliens, the reptilians, who are linked to the Ijij (the travelers) who had a hand in creating modern humans. Absolutely bonkers.

Riley and crew, in an effort to halt the Grays, team up with Korit and NOAHH to complete a number of tasks. For one, they need to blow up their own satellite weaponry because the Grays have gained control of it and are blasting human cities with it. Some of the Grays are also running a hybridization lab out of the Denver Airport. The crew also needs to take back the White House in order to neutralize the hybrids, which infiltrated Earth government. On top of all that, the only way to really stop the Grays is to get them off of Earth because all the added mass and volume of their alien ships is tearing the planet apart, and to force the aliens off of Earth can only be done by contacting the Reptilians, who seem to think the whole galaxy belongs to them.

From great characters, to amazing, and sometimes hillarious dialogue, to action packed battle sequences, this book has it all. I was not disappointed by Dennis. War and Glory really delivered a great closing to the ongoing story, but it opened up a new line of questions for me.

What are the Reptilians’ goals? Will they be invading Earth? Why don’t they exterminate the humans, or try to? What about the Lokians? They still seem to be the key to everything, and evidently, all because Riley traveled into subspace to kill them in the first book. It’s like, there’s the possibility that everything that’s happening in this book’s reality is an after effect of destroying the Lokians outside of reality, and now other realities might be crossing over. I, like, cat even, ’cause I’m all, like, Oh Meow God.

I do have to say, that while War and Glory was well written, fun, exciting, and the perfect addition to the series, I still prefer Beyond the End of the World. I don’t know. Maybe, because it was a totally new type of scifi for me, and now I’m used to the story and the writer’s style. There’s nothing wrong with War and Glory. It was really a perfect book, and I’ll probably be reading this whole scifi series again…waiting for the next one….

It’s an amazing book. Buy it. Buy the second one. The first one is free, so you don’t have an excuse.