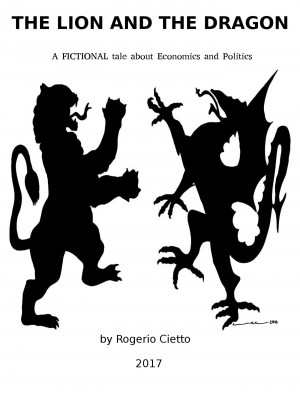 The Lion and The Dragon

By Rogerio Cietto
Rated 5.00/5 based on 1 reviews
A FICTIONAL tale about Economics and Politics, easy to understand More
Hidden between a mountain belt and an endless sea, there was a very prosperous country called Utopia. It was a country full of natural richnesses, so rich that all important natural resources could be found easily, from north to south. There was clean water for everyone, even for those in less favourable regions, and areas for growing crops and animal harvesting. Its population was happy and prone to work, they had pleasure in changing the environment to improve the quality of life and well being of the citizens.
Download: epub mobi (Kindle) pdf more Online Reader
lrf pdb txt
Price: Free! USD
Add to Library
Create Widget
Tags: politics dragon economics lion
About Rogerio Cietto

Military Organizations I have been:

Very inspiring listen to parts before now I have my own

You have subscribed to alerts for Rogerio Cietto.

You have been added to Rogerio Cietto's favorite list.

You can also sign-up to receive email notifications whenever Rogerio Cietto releases a new book.